A new family just moved in. We weren't especially friendly the first few weeks because they were kind of "poopy," and made lots of noise. We didn't even try to meet them. Apparently they were honeymooning, since we heard cooing, and we could tell they ruffled each other's feathers a bit. Finally Dee went to complain about the racket, and discovered they had twin babies! He came back as proud as a new grampa, and urged me outside to get acquainted. There, in the corner of our deck was a newly built nest, made of sticks and feathers, with two little pigeon nestlings. 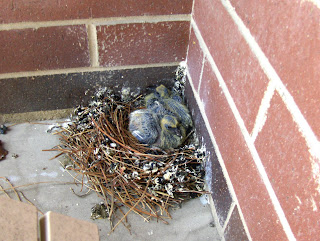 The parents are very attentive. We can't tell which of the two is the mother, because they both feed the babies. One of them is usually sitting on the nest, and the other sits on the railing of the deck. We live on the 7th floor of our building, and when we go out to look at them, the big birds fly away and watch us from the deck across from us. We have been careful to make them welcome, but not disturb them in any way, and they don't seem afraid. Just watchful. I looked up pigeons and from the pictures they seem to be about 7 days old. They are fledglings for about 30 days before they fly off, according to the book. We are excited to watch their growth and progress.

The deck has doors to our bedroom and our office, so there's always a bit of activity going on. When Dee spotted the babies he immediately motioned for me to be quiet. He has started tiptoeing around and worries that sirens, cars, or the phone will scare them. He checks on them several times morning and night, and has now started providing them with birdseed. I often forget to turn off lights when I leave a room, which has always been a little careless according to Dee. Last night he wanted to leave the lamp on in the office "so they'll have a little night-light." He's a sucker for a cute chick. 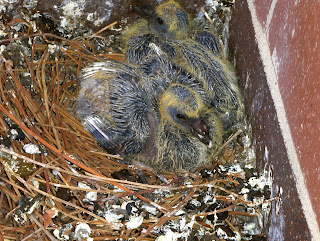 Email ThisBlogThis!Share to TwitterShare to FacebookShare to Pinterest
Labels: Blessings

I love new neighbors! Did take them a plate of cookie or bread crumbs?

So are these my new brothers and sisters?

Meeting these cute neighbors was a highlight for our day. Ashley was taken with these little friends. She wanted to see them again and again. Keep documenting with pictures so we can see how they grow.

Oh, Opa...how much we love your little tender heart!

How fun to have a nest in your very own downtown nest! You'll have to name them, maybe Martin and Deedra! Congrats to you.

i love marta's names...you better watch out mod..if dee is so taken with these new chicks!

They're so cute. It will be fun to watch their growth.