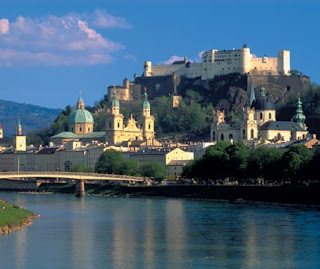 Salzburg, Austria
February 1, 1969, my life started over. I met Dee . . . and Europe. What a brilliant combination!

Salzburg, Austria was the destination for a semester abroad, but our first stop was Paris.

Our hotel, a former train station on the Left Bank, (which has since been transformed into the Musee d'Orsay) had in a huge lobby where we were getting room assignments and sorting through luggage. A few of the girls decided we wanted to go to Folies-Bergere for a midnight show. It was pretty daring for naive 19-year-olds, so we decided to ask some guys from our group to go with us as chaperones. I looked over and recognized Dee and another boy getting off the elevator, so even though we'd never met, I brazenly went over and invited them to come.

Although they were older men (in their 20's) they seemed shocked at my request. Dee's first words to me were, "I don't know. I'll have to ask my companion." His companion??? Whoa. He seemed a touch on the dorky side to me. I found out later they just didn't want to spend any money, and they were intimidated by a large pack of giggly girls going to a striptease joint.

Neither of us had an inkling of what lay ahead for us. Our little worlds had collided and the universe changed course.

Think how many times this has happened over thousands of years, and yet it has only happened to me once. I still wonder how and why I was so lucky! One boy + one girl = 7 kids + 7 kids in law + almost 20 grandkids . . . 36 lives changed forever because I walked across that hotel room. Just ten days later I was Dee's constant companion.
Posted by Travelin'Oma at 3:42 PM

I, for one, am a recipient of your great universal crash, and am grateful to have had my own life path forever altered. So thanks!

sweet Marty....I'm looking forward to future chapters (you are saving print copies in your journal for your children aren't you?)

wow, I'm so jealous you got to stay there! It's such a beautiful building.