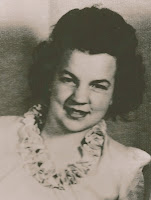 Afton was born March 1, 1925. She would be 82. She was my mother-in-law, but I didn't know her well. The very day we came home from Salzburg she was diagnosed with MS, at age 44. Although the name of her disease hadn't been known until then, serious symptoms had been bothering her for about ten years. Her body was failing her, and she couldn't walk, or take care of herself. She was in bed all the time by the time I met her. She lost communication abilities quickly after that, and her illness became ever more debilitating, until she died in September, 1980, at the age of 55. I've missed having someone who could tell me about Dee in his childhood. I wish she could have seen what a wonderful husband, father and grandfather he's been, and I wish she could have known our kids. She's a main reason we had them all.

Afton was the oldest of 10 children. Her younger brother, Dee, died at 18 months, but the rest of them grew up in a loving, close-knit family. Afton eloped at age 17, and her 18 year old husband went off to war a month later, leaving his young, pregnant wife at home. She lived with her family, and her baby girl was adored by all her brothers and sisters. In fact, her mom had a baby only a month before, so they were like twins. Just before the war ended, Afton (at age 20) bought a little house (for $4500!!) and when her husband came home, Dee was the twinkle in his eye! He was a true war baby, born 9 months afterwards.

Afton enjoyed her extended family, and took her kids to visit them often. Dee remembers how much fun they always had together, and he wanted that, too. He was one of 3 kids, not close in age to either of his siblings. When we met, his idea of a happy family was a large one, with kids close in age. He wanted to re-create what he had felt in his mother's family.

Afton raised a dependable son, and instilled in him a desire for knowledge and education. Her creed must have been "A mother's job is to make a mother unnecessary." Dee was taught how to be self sufficient. He learned how to wash and iron, how to clean, cook, and take care of a yard. He became confident, motivated and capable. He has always been respectful and appreciative of me, qualities he must have learned at home. His mom took him to church, and taught him to be honorable. She was strict, but allowed him his freedom, and he knew she trusted him. He was obedient, and respected his parents. I can tell he was raised by a loving woman, who expected him to become his best self.

Dee's mom instilled a great love of reading in him. He doesn't remember them ever talking much about it, but he saw her reading all the time, and it was natural to him. She gave me a special gift in our very short time as friends. She suggested I read the book "Five Smooth Stones" by Ann Fairbairn, and she gave me her copy. It is one of my all-time favorites.

"Five Smooth Stones" is the story of David, a black boy raised by his grandfather in New Orleans in the 1930's. The grandfather makes sure he gets a good education and he becomes a lawyer in New York. In the 1950's he falls in love with a white woman, and together they become involved in the Civil Rights movement. David is more than a character in a book. I feel like he's someone I've known. When I finished the book the first time, I thought about him for months, and missed him. I learned so much from this book, and I've re-read it several times. I'm grateful Afton shared it with me.

We don't know how we influence people, or how long our influence will be felt. Without even being present, Dee's mother has been a constant influence on Dee, me, and our family. I wish I could thank her for her contribution to my life. I love her for it.
Posted by Travelin'Oma at 2:17 PM

Sweet Afton. What a nice tribute. Thanks.

So great to learn things about her. I had no idea she was so young when she died. She sounds like a great lady!