Tommy was born when I was only 18 months old. I can't ever remember my life without him. 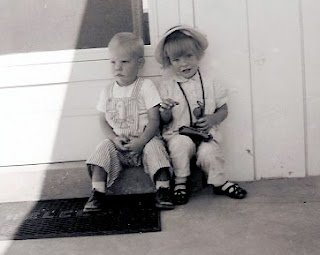 We were cute little guys, and our life was happy. We had great adventures in our backyard, playing spaceship with the picnic table turned over on it's side ready to carry us off to the great unknown. We sneaked into each other's bedrooms when we were supposed to be asleep and planned how to reappear in the living room and snitch drinks of coke, or maybe stay up for Maverick.

Tom was the heir, the firstborn son, the only boy to carry on the family name and we all knew he was special. Luckily he was very likable, too. 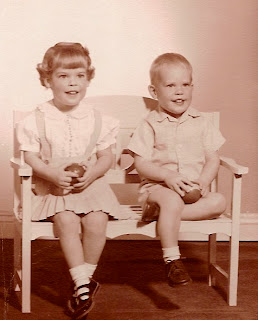 We lived downstairs together and we both loved to read. He read all my Nancy Drews and I read all his Hardy Boys. He left Louis L'Amours in the bathroom, so I read all of those, too. We used to stagger into each other's rooms, and groan as if we'd been shot, then stage a death scene worthy of any Lone Ranger episode. We watched the test pattern anxiously every Saturday morning waiting for Howdy Dowdy, Circus Boy, and Jungle Jim.

Our mom and dad allowed us to tend the other kids while they went out on Friday nights. We listened to the radio and called in requests. Tell Laura I Love Her was one of our favorites. Another of our activities was prank calling. Those were the good old days before caller ID. Just before Christmas one year we decided to open all the presents under the tree while our parents were out. It was a great disappointment because they turned out to be wedding presents, and we lost interest and forgot to re wrap them. Aren't kids fun?? These are a couple of other Christmas memories. 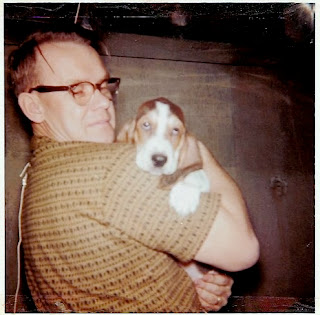 Santa delivered our Basset Hound puppy. We named her Flower. 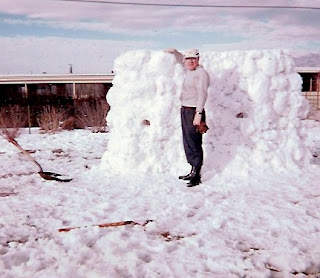 This was our snow fort. It was an unbelievable achievement of snow, strength and engineering, and as tall as our dad!

Tom was taught to never hit a girl. We could torment him in many ways and we were safe, until Polly broke her arm. She was beating on Tom with all her strength, and the weight of her cast, and he was helpless against her. Suddenly our dad appeared and recognized that we were not showing much respect to our brother. He gave Tom permission to fight back, and Tom was suddenly someone to be reckoned with. He was never mean, but when pushed too far, we knew we'd have to bribe him with back rubs or doing his chores to keep our faces in tact.

Grampa made us stand back to back regularly so that everyone would know when The Big T passed us all up. It's funny that we knew he'd be tall, since we're a family of short people! But he lived up to and even passed every one's expectations! 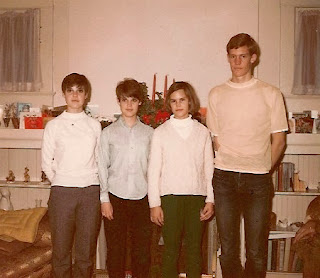 Tom was a man among women for his early years. The experience catapulted him into a position to be a man among men. Happy Birthday to the best brother I've ever had!
Posted by Travelin'Oma at 1:48 AM

those are fun memories...of course, since i'm soooooo much younger...i don't remember them all!

I have always wished I had a brother; can I have yours?

I don't have all your memories, but I do remember whacking Tom on the back with my cast...that was the end of torturing Tom. He has always been a kind and caring brother to me. I am also grateful that he is my brother.