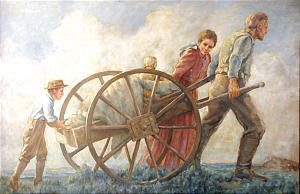 Against my better judgment I became a pioneer woman for a week. Our church youth group recreated a Pioneer Trek, complete with sunbonnets, bloomers, aprons and handcarts. As a leader I was expected to be part of the four-day activity as a chaperone, even though the teenagers would be divided up and grouped as families with kids they didn't know.

Specially trained young adult couples played the parts of Pa and Ma, while the legitimate adults were assigned to accompany each family as participants. I had a 16-year-old son and a 14-year-old daughter who were excited to go, so I reluctantly agreed to join the group. I knew we wouldn't be put in the same trek family, but we would have a shared experience and that was a good enough reason. 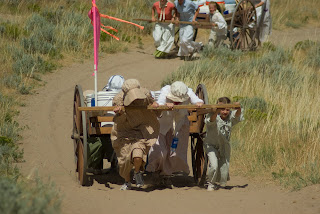 It was a grueling first day. The kids started out with energy. I started out tired. We put together our own handcarts and loaded them with supplies. Since they weighed several hundred pounds, each member of the family was supposed to help pull or push the handcart on the 13-mile hike.

Ours was one of the first wagons in the train and we set off with vigor. Excited jabbering and singing was heard down the trail behind us. By 2:00 in the afternoon the little enthusiasm I had had early that morning was gone. It was 100° and I was out-of-sorts with exhaustion, and hunger. Some of the kids were whining and complaining and I identified with them. 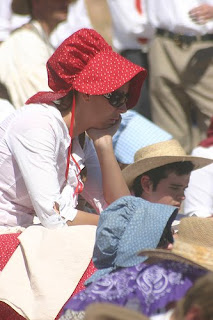 I started dragging behind, walking slower and slower as the other handcart families passed me by. Whose idea was this anyway? Why would we take a bunch of teenage kids into the wilderness and subject them to such hardship? I felt disoriented, lightheaded, and miserable.

The trail boss, a man I respected and trusted, noticed me and led me over to a stream where he soaked my bandanna in the cold water, and gave me a canteen of Gatorade. He suggested I ride in the support vehicle behind the group for a few minutes to regain my strength. 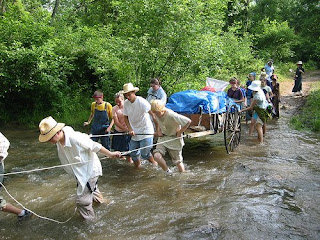 Relieved of my sunbonnet, in the air-conditioned Suburban, I cooled off quickly, and chatted with the driver, a good friend who was a physician. He assured me I would make it, so a few minutes later he caught up with the group and let me out, and then dropped out of sight again. 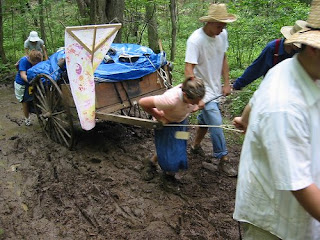 I walked a little faster, passing other handcart families to reach my own. Instead of the flat trail we had been walking all day, we were now going up a mountain. It got steeper and rockier, and was difficult to navigate in a long skirt. Soon I was actually scrambling on all fours, climbing over the rocks. I had passed one group and now I was behind a handcart that perched precariously on some rocks. It was off balance, and the kids in front were pulling while others were behind, trying to push.

Suddenly I noticed that it was quiet. The ma's and pa's had asked the trekkers not to talk. The kids had to negotiate the handcarts on this difficult stretch silently, cooperating by observing their companions, and just doing what became obvious to them. Then the pa's whispered to the boys that they could not participate in the work. It was time for the Women's Pull. 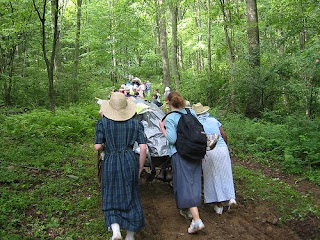 We had been forewarned that there would be a section of the hike where the girls pulled the handcarts alone. Of course it was highly anticipated. The young women were anxious to show off their fortitude and stamina to all the guys. However, the results were not anticipated.

The mountain was the most demanding area we would encounter. Everyone was tired, and shaky from heat and exertion. Going up the steep, rocky slope the families had needed everyone's strength, and now it was cut in half. The boys witnessed the trouble the girls were having; some ran for water, and others whispered encouragement, and went ahead to move big rocks out of the way. The girls had resilience, and discovered new muscles emotionally and physically, tears running down their cheeks as they exerted courageously. The young men were overwhelmed with respect, wondering if they could have risen to such a challenge.

I'm embarrassed to say I didn't have the energy to help. Getting myself up the hill was all I could manage. I was several yards behind a handcart that began to tip. A tiny girl, her face shaded by a big sunbonnet, supported it from behind. I watched as her feet dug into the dirt between the rocks, her back hardened and her shoulders tensed. Her arms clenched while she
pushed the wagon with force and determination. With the help of the girls in front pulling, she jostled the cart up and over a giant boulder in the path.

For a moment she caught her breath and wiped the sweat from her forehead. As she lifted the brim of her bonnet I saw it was Amy, my 14-year-old daughter.

Even after 22 years, the lessons of my Pioneer Trek continue to unfold in my mind. I would never have expected such inner fortitude of young city slickers; we all stumbled on power hidden deep inside ourselves. The experience demonstrated potential and capacity, and I knowwe can do impossible things when we need to. And so can our kids.

Sometimes the most help we can give someone is to let them do it on their own. Desperation can be the source of motivation. A person who is balancing their whole world is more careful about where they place their feet. I learned that from a girl in a sunbonnet.

Think about a time you did something hard. Are you in the middle of a Pioneer Trek experience right now? Write about it. Discover what you're learning. If you write about it, you can learn from it the rest of your life. Eventually you'll see the hard thing as one of the great blessings in your life.

Posted by Travelin'Oma at 4:06 PM No comments: 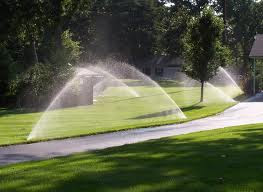 One day I was sitting in my friend Julie's kitchen, watching her four-year-old through the window. Lauren was playing on the sidewalk when the sprinklers suddenly went on—she shrieked! Arms thrashing, feet slipping, she twisted blindly and howled for help.

"Just walk forward," her mom called through the window. We could see that she was only a few feet from relief, but her predicament was too overwhelming, and her wailing was too loud for her to hear. "Lauren! It's OK! Just walk!" Tears mixed with drops of water and ran down her cheeks while her older brother dashed outside to rescue her. He took her arm and steered her out of the spray.

She wiped her eyes and smiled up at her mom before she started skipping down the sidewalk. The whole traumatic episode had only taken a minute or two, and was forgotten immediately.

I can look back at times when I've been surprised by what seemed like a deluge. I've howled for help with such a racket that I've drowned out the quiet response, "It's OK, Marty, just walk forward." That's usually when someone shows up to walk with me a little way, and suddenly my tears are gone, and my path seems clear.

I love it when that happens.

Have you had a life lesson lately? Write it down!