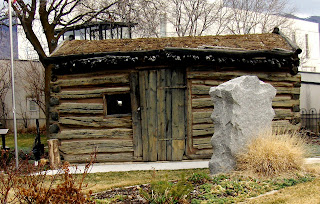 Our cabin was built on the Weber River in 1845, the first permanent dwelling of a white man in the state. Miles Goodyear was a fur trapper, and a mountain man. He married an Indian woman and they lived by the river several years. The cabin was later moved a few times and finally ended up in a ramshackle and decrepid condition, wrapped in chicken wire, behind the Ogden DUP museum. It was an historic hidden treasure! Dee had actually been visiting it for a few years when he finally convinced a friend that it would be possible to restore it. She donated the money to the DUP and Dee was hired in 1994 to bring it back to it's former glory. What had he gotten himself into? 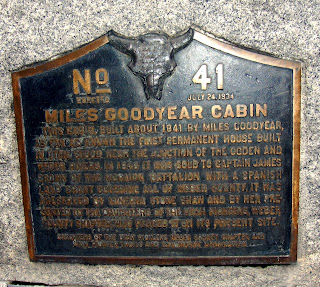 The cabin had to be dismantled and then restored in the way it was originally built. First of all, Amy drew a diagram of it, log by log. Then each log was painstakingly labeled before Dee, Josh, Micah and Pete and a few others took it apart. They hauled the logs to a warehouse, where they were cleaned and treated, and left to cure. Several times during the winter Dee went to check on the stacks of logs. It made him sick. He couldn't imagine how he was ever going to recreate the cabin! He came home sicker every time he visited. It looked impossible. The whole project seemed like a nightmare. Whose idea was this? The DUP ladies were impatient and annoying. They always seemed to call when Dee was gone, and I began to hate them.

A new cement pad was poured behind the Tabernacle and the logs were hauled back. Pete's Eagle Project was to get everything ready to be put back together. With the help of the diagram, eight boy scouts started stacking the pieces on top of each other like Lincoln Logs, with Dee directing. It was like constructing a giant puzzle. The scouts had done their bit after one day, and Dee and Pete were left very short-handed. It took weeks. 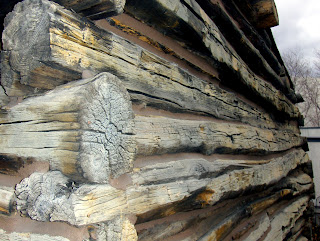 The cabin had had a sod roof, and replacing that was the biggest challenge. How do you get tons of dirt on top of a pile of sticks, without collapsing the whole structure? Miles Goodyear and his Indian wife had done it all alone, so Dee knew it could be done. With a lot of research and trial and error, it was finally accomplished. 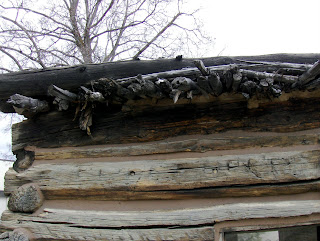 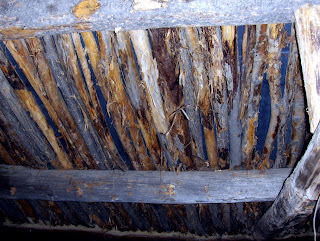 As is common in projects like this, the money and time needed were vastly underestimated and there was still a lot to do. By then it had become a labor of love. The opening of the cabin was only a few weeks away, and dignitaries and media people had all been invited. The DUP ladies were frantic that it wouldn't be finished, and although Dee was assuring them it was under control, he was actually a wreck as well.

One day in desperation he checked our kids out of school and we all went up to the cabin to "chink." Chinking is a mixture of straw, dirt, and manure that is used as a mortar between the logs. It is put on with a trowel, and it is a mess. That day it was pouring rain, and cold, and we all stood in the mud and slapped on the chinking, trying to make it stay where it was supposed to. We put it between all the logs both inside and outside. Several days after it dried, we went back to smooth the earthen floor. That day was very hot, and we had a hose and a huge roller. After the dirt was wet we were on our knees patting it down and dripping with sweat before it was rolled over and over again to get it even. Finally the cabin was ready to be furnished. 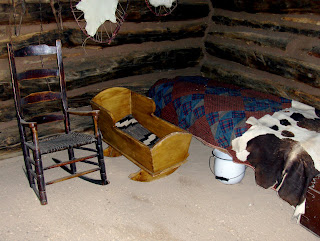 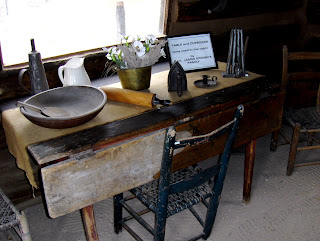 A few days later some wild flowers were planted, and it was finished. It was a miracle! It was dedicated and is always open during the summer as part of the temple grounds. Every time Dee is faced with an overwhelming challenge he drives up to the cabin. It reminds him that you can take a pile of sticks and make it something worthwhile. He always comes home buoyed up and refreshed. 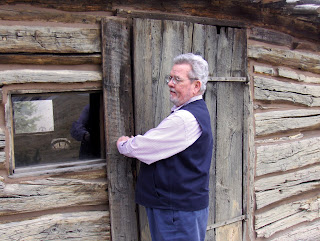 We never have parties there, we never stay overnight...we don't even have any claim to it. But it is most definitely OUR cabin.

wow! that is so cool...if i knew you did that, i must have forgotten...no memory left...but i think that is really neat...and what a great place to have your cabin...maybe you could stay overnight and be dressed like they did...

I can not help but think we have somewhere crossed paths before. We have lived in Ogden twice for about 9 months each time.....

Thanks for sharing this....it is indeed a beautiful cabin

oma, your pics turned out great. you sure have an eye. we loved venturing into 'the wilderness' to see all the historical spots of o-town. thanks for the fun fieldtrip!!

what a neat accomplishment! Not only do you record history, but you help re-create it. I'm so impressed how your whole family came together for this project. I agree with mom, maybe you could dress as the times and spend your summer vaca there. It could help attract tourism.

I think we ought to hit up the DUP for a plaque denoting the restoration of the cabin...if they say no, we'll hose them down.

How fascinating! And what a wonderful learning experience for all involved as to how things were actually done "once upon a time". We have no cabin, but we have "our tree" over in the central Oregon high desert where we go and pitch our tent when we want to get away from it all. Everyone needs a space like that somewhere! A great post, Oma!

I'm doing the lesson this month for our DUP camp in Washington State, and it is about the DUP museum there in Ogden. Thanks so much for the story of the restoration of this cabin, it has really put a personal face on its history for me.

This is very much part of interests. Having weekend time in another home and place from the regular; it gives different taste in the life.
It is very cool things in your hobby.

My 4th grade daughter is doing a report on Miles Goodyear, and while searching the internet, we came across your blog. This is a fascinating story about restoring the cabin. Kudos to Dee and your whole family for such a wonderful accomplishment!

The story of Miles Morris Goodyear has special interest to me as he was my 6th cousin (4X removed). There are numerous stories about his history at Ancestry.com and various references to be found in the internet. Thanks for your article and photos which have been added to my family history