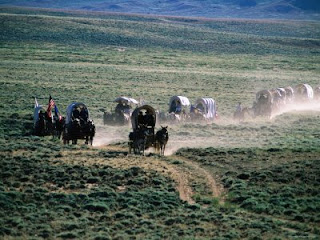 Great-great Grandpa John Bagley was only eighteen when he left his family in eastern Canada. He joined with the Mormon pioneers to prepare for a trek across the plains from Illinois to Utah.

John was extremely trusted and took the responsibility of caring for a widow and her children in the wagon train. He drove the lead team of nine yoke of oxen into the valley in 1856 when he was just twenty years old. Later, Brigham Young requested that John accompany him in many dangerous situations as a body guard. At the age of 58 he wrote his life story in his own hand, recalling his adventures with Indians, wild animals, cholera, and starvation. 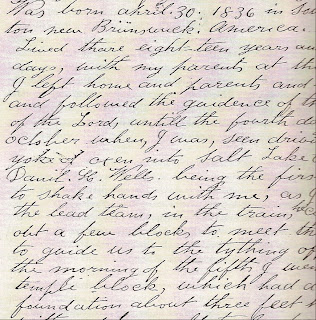 John's Journal
But there is one particular feat John is remembered for.
John had worked in a lumber mill with his father from the time he was a little boy. Four days after his arrival in Salt Lake Valley he started work on what would become six lumber mills in Big Cottonwood Canyon. He helped build roads, haul logs and build silver mines in Alta, and became known quickly for his ability and agility. 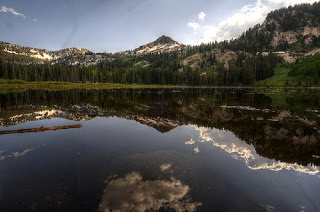 Photo: Lake Mary, Brighton, UT Project 365:185/366 Flickr
On July 23, 1857, nine months after John's arrival, 2,600 people (with 500 vehicles and 1,500 animals) gathered at the bottom of Big Cottonwood Canyon for a giant anniversary party. The first pioneers had settled the valley ten years before, and there was a celebration planned ten miles up the canyon in Brighton. The group followed Brigham Young and a long line of dignitaries in carriages and wagons. A marching company of 50 kids between 10 and 12 years old led the way up the canyon, along with a brass band that furnished music for the celebration.

At sunset a bugle summoned the campers to a central elevated spot where Brigham Young addressed them. On the morning of July 24, the flag was unfurled from a giant pine tree, standing on a peak. Prayer was offered, then singing, and afterward cannons roared. The Big Cottonwood Lumber Company, for which John worked, had constructed the road as far as Lake Alice, near Silver Lake, expressly for this occasion. Today there is a small chapel at the top of Big Cottonwood Canyon, in Brighton, close to where the celebration took place. 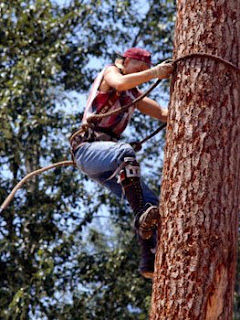 Photo by Blozan's Tree Climb
This is how John recalled the day of Celebration:

Brigham Young's tent was near a towering pine tree 100 feet high. That tree was selected as a flag pole for the unfurling of the Stars and Stripes. I had been reared in the timber lands of eastern New Brunswick, America, and was experienced in handling timber and logging, so I was selected by President Young to trim the tree for a flagpole. 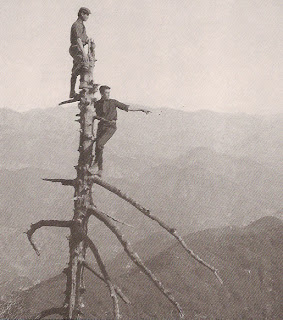 As I descended, I trimmed the other branches, and when I was among the trees that were not so lofty, I seized the branch of another tree and ape-like, swung from the flag pole and disappeared. The people below thought I had perished and were quite concerned until I finally appeared having made my way through the branches. 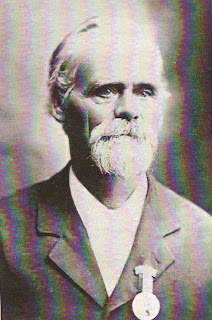 He sounds like a great, great-great grandfather to me!
Posted by Travelin'Oma at 8:38 PM

What a fun legacy! Thanks for sharing.