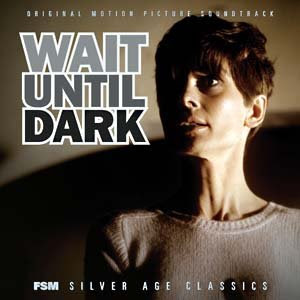 It's a terrific damsel-in-distress suspense film, with Audrey Hepburn as the frail, vulnerable heroine unknowingly caught up in a drug smuggling plot, slowly realizing the danger she's in. And she's BLIND. When the kids asked for a scary movie, I remembered Wait Until Dark—a doll, a little girl, PG, 1967—old-fashioned thrills. I had forgotten the pulse-pounding plot and truly creepy performance by Alan Arkin as a psychotic thug.

When it was originally released, there was an announcement: "During the last eight minutes of this movie all lights in the theater will be extinguished. Those of you seated in the smoking section are kindly asked to refrain from lighting up during this time to maintain the suspense of the story."

Some parts were confusing to the kids. They didn't know about phone booths, dark room chemicals, radiators, or film. During the most dramatic moments I was explaining that telephones used to have cords. But even after 40 years, this movie holds up. 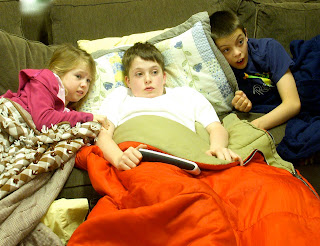 When the dead guy grabbed Audrey's ankle, we all screamed. Too late, I realized this is not a kid's movie. Oma at her best.

Last time we tended these kids, Opa brought an old movie that turned out to be rated R. We haven't lived that one down. That may be why the kids were instructed to look after me instead of the other way around. 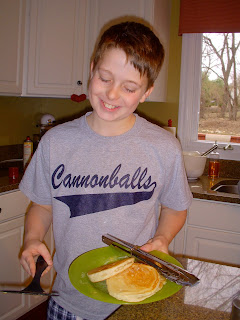 "Sleep in as long as you want, Oma. We can make breakfast." At 9:30 I rolled out of bed, (noticed the kid's beds were already made) and savored the aroma of pancakes. Mack squeezed a lemon into the batter. "How did you discover this recipe?" I asked. He answered, "One day I accidentally tried it and I became a master." 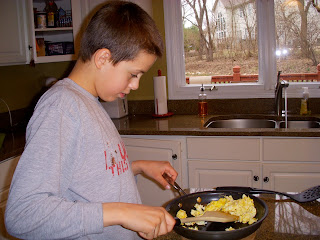 Another course? Not to be outdone, Chase whipped up some eggs, bragging that he sometimes drinks them raw. (I'll take mine scrambled, thanks.) I got up to get the salt and pepper. "NO OMA! You're not supposed to lift a finger!" They emptied and loaded the dishwasher, wiped all the counters and vacuumed after every meal, without being asked. 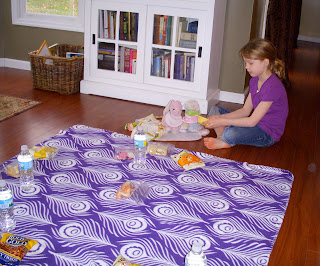 Hannah had lunch ready before breakfast was cleaned up. We had planned to go to the park for a picnic but it rained. So she set out peanut-butter-and-fluff sandwiches, cheetos, apple slices, cookies and water bottles on a picnic blanket inside. We sat on the floor and played Twenty Questions. McKay said, "I've got one . . . ask me yes or no questions." Chase's very first question was, "Is it toxic waste?"

Chase adds a zing to every activity. At the restaurant he ordered soup in a bread bowl. He picked it up, drank most of the soup and then took a giant bite out of the bottom of the bowl. "You're supposed to eat the bowl, too, Oma," he explained, wiping soup off his chin. His ice cream cone was devoured the same way—from the bottom. I commented on his style, and he said, "I have to eat this way because I have an overbite." Hmmm . . . 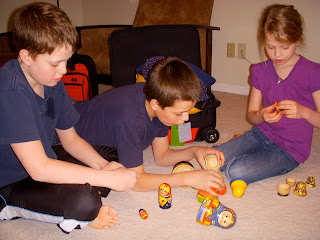 These kids are absolute dolls. But just wait until dark.
That's when we get out our laptops. 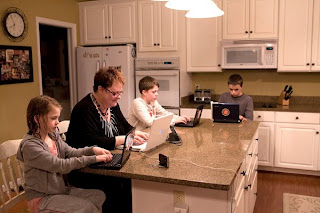 Grandkids have restored my belief in heredity!

~What's your favorite old movie?
Posted by Travelin'Oma at 1:55 AM

simply beautiful...of course I smiled the whole time I was reading your post... such a beautiful family....your blessed Oma:0)

In my next life, you are going to be my grandmother!!

"Wait Until Dark" was my first scary movie. And it scared the you know what out of me. Still does!

Ok, seriously? How do I teach my kids to be that awesome? I am not even that good about cleaning up...or getting breakfast on the table before 10...or making my bed...

PG = parental guidance
My kids said that meant that they had to let me know if the movie was okay for me to watch.

You know I've seen part of that movie and wanted to see more of it but have never known what it was called. hooray! Now I do.

i remember when my grandma watched Gone With The Wind with me for the first time. She told me about when it first came out, and how you could go and tour the area where it was filmed. I have three copies of it for myself: vhs, dvd, and special edition dvd. Three copies might be a little much, but it's my all-time favorite movie!

i would expect no less from the amazing stie.

i havne't heard that much horrified giggling in a long, long time. and it was the first time i heard it from my husband's mouth.

needless to say, we opted for wizards of waverly place instead.

wait until dark is an all time favorite. still scares me to death, even though i've seen it many times. audrey is at her best!

They are still talking about the fun they had with you. You are the stuff that legends are made from. Thanks a million.

Audrey Hepburn is my hero!!! And your grands are awesome!!

I don't show my grandchildren scary movies because I get too scared. It's not my favorite movie, but I've been longing to dig up "Mr. Hobbs Takes a Vacation," the old Jimmy Stewart movie about vacationing with the grandkids. Remember, "I hate Boom-pa!"?