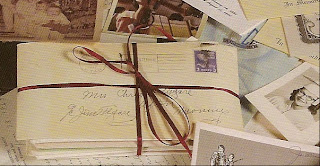 So it was time to dump the boyfriend.
This was embarrassing, because in my pre-true love days (just two weeks before) I had assured him I loved him, and even thought I meant it. We had dated for about three years, and I knew his whole family, even his grandparents and cousins. He wasn't really who I wanted to marry, but I thought he might turn out to be, after we'd grown up. I had grown up now, and he was still a kid on a mission.

He was in Brazil. The day I arrived in Salzburg I'd sent him a package of candy for a birthday present. His birthday wasn't for eight weeks, but I couldn't afford airmail, and surface-mail took forever. I'd been sending him letters every day for a year. Since my love affair with Dee had been so sudden, I hadn't done any "prep work." This news would come as a total shock. Even worse, I also had to break up with his mother.

All night my roommates and I composed my "Dear John," using the appropriate compassionate and loving words. I wrote it and re-wrote it. Then I wrote to his mom. The next day I mailed his letter, and a few days later I mailed hers. It was sad and liberating at the same time. I was a woman now, honest in my relationships, mature and adult in how I dealt with others. But I was terrified of what would happen next.

A couple of weeks passed before I finally received my response. It was one page. His mother had written him a condolence letter: "You'll get over her, you'll find someone else, it's all for the best," etc. He'd cut that paragraph out of her letter and glued it onto this page. "Thanks for letting me hear it this way," was the only sentence he'd written.

He hadn't gotten my letter! I felt awful. We always numbered our letters so we'd know if any went missing (that was a common thing in Brazil) but none had ever been lost before. The "Dear John" was the only one that didn't arrive.

After spending so much time on the first draft, I still remembered it almost word for word, but I couldn't re-write it in case the other one somehow appeared. So I composed a second compassionate and loving letter, which really meant, "Sorry, but I guess I didn't love you very much after all," and mailed it off.

In April I got a last letter from my old boyfriend. He had received the 2nd Dear John—and the birthday package—on the same day: his birthday. Not knowing about the early posting of the present, he assumed I'd sent it more recently. He wondered if that meant I still wanted to write to him. Apparently he was OK with me being in love, and even getting married, but he would miss my letters. (Maybe he should read my blog.) I had to write again and say I wouldn't be writing again.

I never heard from him after that. But I did see him one more time.

Fast-forward 16 months. I had just given birth (4 days before) to my first baby and I was staying at my mom's. I couldn't fit into anything, so I was wearing one of Mom's housecoats. My boobs were boulders protruding from just below my chin, and my stomach wobbled loosely when I shuffled down the hall (carrying my donut pillow) to answer the doorbell. And there he was.

Freshly home from Brazil, he was there to woo my little sister. I was mortified, he was speechless; I was a mother, he was a kid. Vast relief spread over his face: he'd been dumped.

~Write a letter of closure to somebody. It could be a thank-you to an former teacher, a late sympathy note you've been meaning to send, an apology letter to someone you've offended. Get it off your mind.

~Write a paragraph (truth or fiction) about running into an old flame.

~Go to the library and get 84 Charing Cross Road, by Helene Hanff. It's a wonderful love story written with letters.

and at the very least, it's better than the torturous segment "he's just a friend/dear john" from saturday's warrior.

Oh my goodness! The mail service strikes again. What a way to botch their job.

Now I'm off to look for that book.

What a story. It certainly wasn't meant to be, but it sure took some doing to undo it! I loved reading it. Thanks for sharing. That's one of my favorite movies. Glad you mentioned that too.

Gasp! Can you imagine his shock to get his mom's letter without yours? And especially after you had planned so carefully.

Well. You ended up where and with whom you should have. Isn't it nice to know we can look back and things work out so well?

Here's what I wrote for your School days seminar about my break-up.

I caused some pretty bad breakups during my teens and early 20's, but none by letter and none over a long distance. Considering how my break-ups happened, I might have been better off had they been a long way away!

Don't you just wish you could have seen him one more time when you were not just four days-post baby? I like revenge like that. Too bad.

I haven't been here in a while, and I haven't done any of the homeowrk, but I have LOVED reading your and Dee's love story! It's so romantic! And I hate Susan too! This is the funniest break up story I have ever heard -- the poor guy!

Great story! My oldest daughter once had a relationship I couldn't fathom. He wasn't terribly attractive or personable. Years later, after they had broken up and she had married someone else, I found a bunch of his letters and notes to her. I went, "Now I understand!" He was a wonderful letter and note writer--witty and eloquent. I always told my high school students who were boys that story. They could relate to it much more than the story of the Brownings' epistolary romance.

you and my mom were missionary heartbreakers!