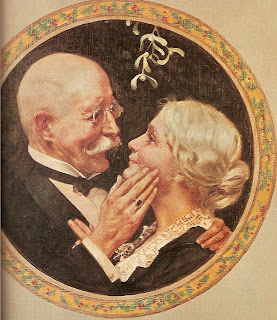 I was alone in the pool when an older woman joined me. (In my world, older is 75 and up.) She seemed anxious as she climbed in, looking around for someone. She said she was waiting for her husband.

When he came, he seemed surprised to see her. "Oh. Hello," he said. He got into the water and she splashed him a little bit, and he said, "You know, I don't know how to swim." She replied, "Oh, you know how to swim, don't you?" He said, "When I was a boy, we lived by a lake, but I never learned to swim."

Then he went under water and swam the length of the pool, turned around and swam back to her without coming up for air. She splashed and teased him a little bit more, and he turned a somersault in the water, like a teenage boy. He looked older than she did, but they seemed kind of flirty, and it was fun to watch them. After a minute he said, "I never learned to swim. Did you know we lived by a lake?"

I wondered if they were newlyweds. It seemed that he was telling her something she would have already known about him. He started off again, doing the backstroke this time, and she caught up with him saying, "I'll race you." They both got to the other end, turned around, and returned to my side of the pool.

She tousled his thinning hair, and then kissed him on the nose. "What's your name?" he asked her. Then he repeated, "You know, we lived by a lake when I was little and I never learned to swim." She said gently, "Yes, dear. You told me. But you do know how to swim." He looked at her wistfully, and asked, "Do I?"

When I told my husband, I said, "She was so sweet. What if that happens to us? What if someday you don't remember my name? What should I do?"

Email ThisBlogThis!Share to TwitterShare to FacebookShare to Pinterest
Labels: Love and Marriage

Classic Opa. I can just see this whole conversation.

haha. funny. I can see my husband saying something like that.

that movie "the notebook" scarred me for life. now i live every day preparing for dementia. my poor husband is forced to endure "memory making moments" wherein i play various songs, "invite" him to tell me things he loves about me, and then try to burn them into the depths of my brain.
so thanks for the tip. next MMM: a trip to the pool. or lake. with a nametag.

I just found out a few months ago that both of my parents have Alzheimer's. I'm still reeling with the emotions, practical implications, etc. I haven't even blogged about it because it is too close still.

I hope and pray it is as sweet with them as this encounter was. I'm not sure it will be.

That's very sweet. My fiance's grandmother is starting to lose her memory and it's very hard, she knows it's going and the more she tries to remember the worse it gets. Sometimes I almost feel it would be better if she were less aware, at least then she wouldn't be angry and frustrated. I feel so sad for her. She is ready to go yet there is nothing physically wrong with her.