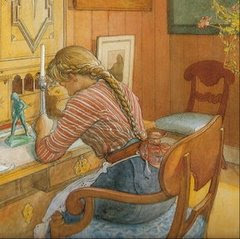 Art by Carl Larsson
One of my heroes died last week at age 95.
She was the Grandmother Who Wrote Best-Sellers.

Belva Plain wrote her first novel at an age when most people are wrapping things up. Evergreen, the saga of a Polish immigant girl torn between two men, was published in 1978, when Plain, 63, had already raised three children. It stayed on The New York Times bestseller list for 41 weeks in hardcover and another 20 in paperback, and was later made into an NBC miniseries.
As a young woman she was a prolific writer, and sold a few stories to magazines. After marrying an ophthalmologist, she settled in New Jersey and put her career on hold to raise her children. "I couldn't have done both," she said.

By the time Evergreen became a success, Plain was a grandmother. She never owned a computer, and wrote her novels in longhand. More than 28 million of her books are in print, including Random Winds and Eden Burning. She believed coming to novels late in life gave her a unique writer's perspective. She said: "You see your grandchildren, you remember your grandparents, and there's a sense of overall family continuance.

Plain maintained a disciplined work schedule, writing five hours a day, four days a week, and published a novel about every two years until her last, Crossroads, in 2008. Shortly before he death, she finished a sequel to Evergreen, to be published in February. 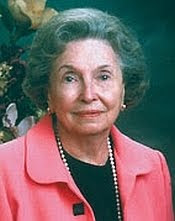 Belva Plain 1915-2010
*It's never too late to start doing something you've always wanted to do! But it takes the get up and go you thought got up and went (scary stuff!) Go find it!
Posted by Travelin'Oma at 12:30 AM

How inspirational! Thanks for the reminder that there is still plenty of time to do something meaningful. I needed that today.

What a cool story!

What a lovely tribute! I can't quite remember if I've ever read one of her novels though...will have to look into the library shelves to see. I can't imagine writing them all in long hand...WoW!!

I want to be an overnight success! Never mind that I've been a scribbler since I learned to write.

Evergreen was one of my favorite books.

I loved Belva Plain and her story of starting to write late in life reminds me of the woman who was 35 and said she had been accepted at Law School but thought she was too old to be a lawyer.

She said,"By the time I get out of school I will be almost 40 years old."

Her friend said," Yes, And how old will you be in four years if you don't go to law school?"

She is now a 43 year old Assistant District Attorney.

I love these tales of people who were late bloomers! It lets us know that it is never too late. My father wrote his last book at 92. It wasn't a best-seller, but it was good!