Sink Your Teeth In 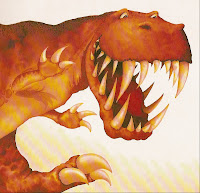 Illustration from Dinosaur Roar by Paul and Henrietta Stickland
I've always admired people
who bite off more than they can chew,
and then chew it.

Here's a scene I been chewin' on today: 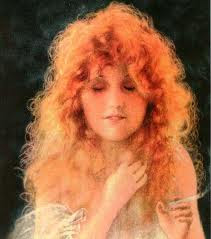 Excerpt from Son of a Gun,
by
Marty Halverson

“You gotta take a bath, mister,” Black Pearl told the man standing by the bar next to Ruby. “There’s a tub down the hall, and Tequila’ll scrub your back and give you a shave. Wash your hair, too. I don’t want no lice in my pillows. This is a clean house.”

Tall and graceful, Black Pearl looked like she'd been carved out of melted chocolate. The girl turned her brown eyes on Ruby. Round as they were, the whites softened her appearance, as did the fleecy crown of black hair. “You’re Jewel?” she asked.

“We don’t go by our real names, much. Most of the fair sisters are eluding the law, or at least a peeved husband.” Black Pearl picked up Ruby’s suitcase and walked toward the stairs. “I read an obituary of a sprightly young bird called Louise in Dodge. Died of tuberculosis it said. And then, she turned up in Fort Worth, as rosy as a peach, going by the name of Lulu. She begged me not to tell a soul, since her daddy said he’d disown her after he killed her if he heard of her sharing her virtues again.” Her teeth flashed a dazzling white when she laughed.

“Husbands. When I find one, I end up running away. I didn’t have any in Sam’s Town so I figured it was safe.”

“Didn’t think anyone would want to marry a soiled dove, meaning no offense,” said Ruby.

“Everybody wants to marry us, Honey,” Pearl told her. “We understand men, know how to make ‘em feel special and loved. Course most of them drink too much, lose their shirts regular in poker games, and frequent places like this, so they don’t deserve decent women anyway. And we aren’t the kind of girls they want to take home to meet Grandma.” She chuckled, then added wickedly, “Especially if we already know Grandpa.”

Email ThisBlogThis!Share to TwitterShare to FacebookShare to Pinterest
Labels: Excerpts from Son of a Gun, Quotables, Son of a Gun, Western Novel

The sentence "Tall and graceful...melted chocolate" feels just a little awkward to me. I can't figure out why - so maybe it's just me.

The rest is fabulous. It makes me tingle to read it.