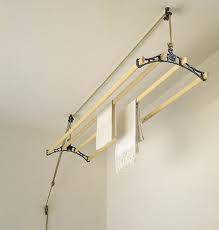 An interesting contraption dangled from the rafters of our lofty kitchen ceiling, in York. It was attached to a cord that hung down and wrapped around a hook on the wall. With a little experimentation, we unwound the cord and lowered a folding clothes rack. It was designed so you could hang your wet laundry and then raise it up out of the way while the clothes (drip) dried overhead. Even so, nothing ever really dried in York. The towels were still wet the next day, even when I draped them over our radiators. 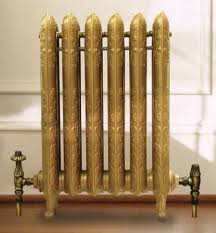 That was because the radiators didn't work. Our house was like a giant barn and there was only one source of heat: an electric fire that sat in the living room fireplace. During the frigid winter months we did everything in that room. It was like living in a log cabin. The kids changed their clothes in there because it was the only warm space. Climbing into chilled sheets numbed them and they pleaded to stay up. Now we understood why there were hot water bottles and warming pans in every bedroom. 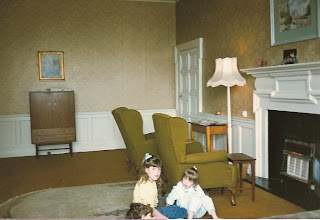 Our only source of heat

Dee got a little propane heater for our room. He'd go upstairs and turn down his side of the bed with the heater right next to it thirty minutes before bedtime; I would sneak up and move the heater over to my side, just to take the edge off. Our three boys lived in the attic, with a window pane missing. Peter was six, and every night he begged to sleep in our bed, with the heater. His little body warmed our bed nicely, so we let him fall asleep there, and then later Dee carried him up to the frozen north.

Cowboys refer to being clotheslined. That's when a rider gets hooked by a low-hanging branch while the horse continues at a gallop. We got clotheslined regularly during our year in England. Life kept clipping along but we ran headlong into experiences that caught us unaware.

There were doorbells in every room that rang a loud bell upstairs. Back in the day they'd been used to summon the servants. The kids discovered them long before I figured the system out. So for the first week or so, I was running down three or four flights of stairs several times a day to answer the door. When nobody was ever there, I got a little paranoid. Were we being doorbell ditched because we were foreigners? Was the resident ghost (we were warned by the estate agent) really in residence? Could I be hearing things in my frenzied mind caused by moving across the world with seven kids?

When that got straightened out it was my cooking that tangled me up. I brought a few cookbooks from the USA so I could cook the familiar stuff. Nothing turned out right. I mastered the oven, adjusted for the altitude difference and still I baked cakes that were puddled in the middle and cookies that were hard and crumbly. It was very nerve-wracking to fail at every meal, especially when it was so much trouble to make it.

Well. Did you know that teaspoons, tablespoons, and cups are a different size in England?? I didn't either. I was measuring everything in the wrong increments! I had my mom send me some US measuring spoons and cups and my recipes worked. 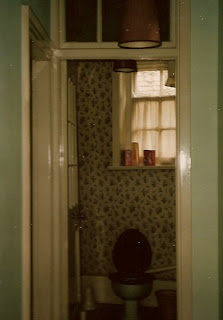 Our loo. The door had a large, clear window in it.

Imagine going into an old gas station bathroom. The toilet is stained, has no lid, and flushes with a chain. The floor might be clean deep down, but looks mildewed and grimy from your perspective. Plus there's a plate glass window in the door, that clearly focuses on the activities within. The wall window hasn't been opened for a hundred years. Enough said. Dee claimed the biggest blessing of the whole year was that he never had to throw up in that bathroom.

Not that I'm counting, but we've been clotheslined regularly in the twenty-four years since we came home, too. Somehow it seems more boring to get tripped up by regular American clotheslines—here they seem like irritations. Nothing to record for posterity.

Why not? Make sure you record the times you're clotheslined, tell it in a funny way, as if it were story-worthy, and it will be. Times and customs change from year-to-year. You don't need a new country to look dumb. It works in the USA, too. You'll be laughing with your grandkids about how your phone rang in the temple, how you forwarded your friend's email accidentally to the person she was ranting about, or how you set off your own car's alarm and didn't know how to turn it off.

A most exciting thing I learned while we lived in York,was that looking for adventures, enjoying the day-to-day quirkiness, taking pictures and writing down memories is just as fun and valuable when you live at home. Just hanging clothes outside on a clothes line could qualify as being clotheslined!

Get caught up in something unexpected while you're trotting through life today.

No time to write today, but I sure love reading about your adventures, no matter where they took place.

I am having lunch with a long time friend today who is in town - they've been living in England recently. I have enjoyed her stories as well.

You capture the essence so well.

Ha! I've never heard the doorbell story. That is hilarious. (But would have been TOTALLY annoying)

I know what everything failing that you used to cook well feels like. Discouraging! The same thing happened to me when I moved from sea level to 7200 feet. I'm still working that one out. I've lived at "lower" "higher" elevations before, but this time is very different.

Looking at difficulties as learning experiences takes some time and some perspective, but that is what they are. I'm really enjoying the story of your foreign sojourn!