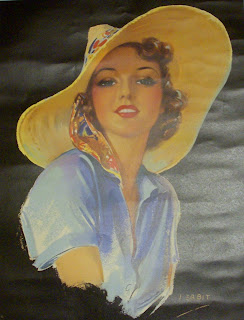 "If we did all the things we are capable of,
we would literally astound ourselves."
—Thomas Edison

My new best friend is Ruby. I'm with her 24/7 and I really like her. Maybe it's because I made her up. Anyway, I've learned a lot from her.

At eighteen she fell for the wrong guy. Most of us did that, but she thought he was her ticket out of a boring life, and literally fell for him, hoping that would keep his attention. It did, for a few hours—just long enough for him to leave her with a souvenir of their, um . . . friendship.

Trying to do the right thing by her new little guy, she left the baby with her mother so she could go to a new place and start over. Back in 1873 there weren't many career choices for an untrained young girl, so, sad to say, she fell back into her area of expertise.

Now, as a soiled dove, she has forgotten who she really is. Stuck in The Fat Chance Saloon, she accepts the lie: "You think you're capable of something more? Fat Chance!"

On the surface, Ruby and I don't have much in common. But I have stayed a few times at the Fat Chance Saloon, and I know how it feels to wonder if I am capable of something more.

Ruby might be rescued if someone sees her potential and helps raise her expectations. Time and again, I have had that experience. Lucky for me, I fell in love with the right guy, and he didn't ride off with all my hopes and dreams. He keeps handing them to me, over and over and over.

I hope Ruby finds a guy like mine. Maybe I'll make one up!

(Here's a scene I worked on today.)
Excerpt from
Son of a Gun

by
Marty Halverson
Jute started a small fire. Pre-empting the conversation, he said, “I don’t think we ought to talk about you and the woman, Boss. It ain’t really fitting. There’s things that won’t stand a straight answer, and what’s between a man and a woman is one of ‘em.”

“You liked her, though, didn’t you?” asked Leo.

“Sure. She seemed a right nice lady.”

“You call her a lady. That’s sort of funny under the circumstances.”

The wizened cowboy fussed with the coals, shifted his legs, and finally got out the rest of his reply.

“Well, let’s just put it this way, Boss. I’ve knowed whores I’d take my hat off to, and respectable women I wouldn’t spit on.”

“I know what you mean,” said Leo soberly. “It’s the kind of thing where people are more what they think they are, than what they really are. You know what I’m trying to say, Jute?”

“Her real name’s Ruby, Jute . . . Ruby.” They sat still again, watching and listening to the flames.

“I reckon most of us don’t get a second chance,” mused Leo. “We don’t get to be our better selves. Folks just expect us to keep on being, and we live down to their expectations. It’s a shame.”

~Who is someone you know who's staying at the Fat Chance Saloon? List some achievements you've observed, and send them a note of congratulations. Raise their expectations by reminding them who they already are.

Email ThisBlogThis!Share to TwitterShare to FacebookShare to Pinterest
Labels: Dee, Excerpts from Son of a Gun, Love Letters to Dee, Point of View, Quotables, Son of a Gun, Western Novel

I seriously can't wait to read the rest of it. When exactly does that get to happen???

It's looking good. These excerpts are tantalizing.

This is my first time to visit your blog and I actually like it. I have a knack in searching for blogs related to Tummy Tankz.