Oral History: Pass It On 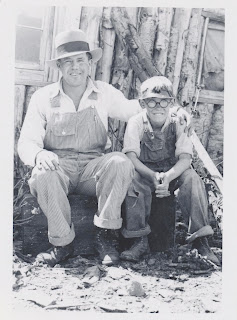 Jiggs and "Unk" about 1935
"We were rich compared to the lady up the hill. She would come down and ask mom if she was going to wash. She wanted mom to save the wash water so that she could run her load."

Jiggs grew up during the depression. "In those days, you started out with the hottest water to do the whites, and then you did the colors and finally the dark clothes, all in the same wash water. You'd put the clothes through the wringer and then in a tub of medium warm water to rinse. Another tub had 'bluing' in it to help whiten the whites. You'd wring them out again and then hang them on the line.

"The woman up the street wanted the water after Mom had done the black socks and overalls. Then she'd use it for her whites. It was encouraging to know there were people poorer than us."

Jiggs was my father. He continued his story. "Dad was always out of work, looking for a job. Mom said she wished she could worry about something important instead of how they'd afford heat in the winter and new clothes for us kids. Thrifty doesn't begin to describe her. When our clothes were beyond mending, Mom removed the buttons and tore them into strips, sewed them together, and wound them into a ball to weave rugs for the house. I think she sold some of them.

"Dad was a great gardener, so we didn't worry about having enough to eat. Peaches, raspberries, apples, vegetables . . . he was famous for his corn. People came from all over hoping to buy a bushel of corn, but he wouldn't sell it. Instead, he gave it away. Dad wasn't a great businessman, but he made sure we were blessed with what we needed.

"Work was our lifestyle. By the time I was eight I was contributing to the family coffers; I herded cows, picked worms, fed pigs, anything for a quarter. My dad would say, 'Jiggs never quits. Give the job to Jiggs, he never quits on anything.' That was the main quality I had. I used to gripe that I never quit.

"Saturdays my mom plucked chickens to earn a chicken for our Sunday dinner. When I was ten she started taking me along because I could kill and clean a chicken in less than a minute. I'd wring the chicken's neck in my hand, take the knife, slit it and pull it right out of it's skin. I hated that job, but I had to live up to my reputation. I never quit."

Born with a cataract in one eye, Jiggs was noticeably cross-eyed from birth. Glasses were prescribed before he was two, and the doctor said he'd probably never see well enough to read, but his dad was not discouraged. "Dad always had high expectations. From the time I was little he bragged about how smart I was. I learned to read by the time I was three—I think it was easy because I only had to use one eye. Eventually my other eye straightened out, but they never worked together.

"In 3rd grade I was skipped to 5th grade. From then on I was the littlest kid in the class, but it didn't matter. I knew I was also the smartest because dad told me I was. He'd show me off to his friends by giving me long, complicated math problems I had to do in my head, which I always got right. I couldn't let him down. When the kids in my class started driving, I did too, even though I was only thirteen. That was one of the perks. I could drive on my paper route, and to my basketball games."

Church basketball was a big deal to Jiggs. "We were playing down at Granite High School to get in the All-Church tournament. Wandermeer Ward beat us. Afterwords, all of us down in the dressing room decided to go get drunk—drown our sorrows. Dad was down in the dressing room with us and got wind of what was planned. Quietly he came up to me and said, 'Be sure you drive if there is going to be drinking.' His high expectations kept me from getting drunk that night."

Years later, when Jiggs had a teenage son, he tried the same strategy. Tom's friends pulled up in a convertible and June saw cartons of beer in the back seat. She went inside and said to her husband, "Jiggs, you have to tell Tom he can't go." Jiggs said, "I remembered the way my dad had handled it, and I said, 'Hey Tom, be sure you drive if there's any drinking.'"

Jiggs was a natural story-teller, and his stories were fascinating. But he didn't write them down. In 1997, two years to the day before he died, I interviewed him about his parents for a family history book I was writing. None of the questions focused on him—my plan was to interview him again about himself. I never did. Luckily, he meandered a little bit that day, and I got a few of his stories in his own words.

~Plan and conduct an interview with someone you love—a kid, a parent or a grandparent will do.
Record it, transcribe it, and treasure it forever. Tips for a successful interview:

Thank you so much for this. These are the kinds of stories I LOVE.
I have a dear friend living in Vermont who collects stories like this from the locals. He has filled two books so far with them, and you would love them:
Weathersfield Tales by Steve Aikenhead.
Thank you for keeping these stories alive...there's an old Native American saying: Things are only alive as long as they are remembered.
xo
country girl

I did an oral history interview with my Grandmother when I was in college. It is probably one of the best experiences of my life, because I realized I didn't know her as well as I thought. I can't stress how important it is to get the stories in your family written down. I wrote up the oral history & later, my parents added pictures & made it into a book for the family. I love this. :) Thanks for sharing pieces of your history.

You really ARE the link in the chain between generations. I love this story and will read it to my kids this morning over breakfast.

p.s. I think I inherited the one-eye reading thing.

What a great story! Too bad you didn't get to interview him. I will be sorry the rest of my life that I didn't "interview and tape" my dad, who rode trains (as a hobo) all over the US during the Depression, looking for work. His life is lost forever.

What a lovely tribute! I'd love to do this but I know that my own nerves about invading someone's privacy get in the way. It's the people who are the most closed-off that I wonder about the most. Hopefully someday I can get up the courage to do this with them. Great post. :)

i love this story and the picture! funny that you'd show it, i have an "unc" story from this weekend. i'll call you.

Fabulous story. Love that you are helping us all to know these kinds of things!

Great story, Oma. My dad had stories to tell like this, too. There is something about folks who lived through the depression and how they came out on the other side.

I love the stories about your family!!!!

I really love this post Oma. You've inspired me to finally write down the story of my grandparents' courtship. I'll be sure to post it on my blog.

i'm so glad you know all these stories and tell us...i love them...thanks...

I love reading stories like this. I think they are fascinating. I wonder if people will ever think my life (as it is now) is fascinating. It sure doesn't seem so right now!

Thank you for sharing.

WHAT an AWESOME idea! LOVE it.
I like the picture. I like learning about my ancestors as well. Granted Jiggs was your Dad--that is cool. And the fact that he planted his crops, fruits and veggies...COOL.
Did your mom can food?
Any-hoo, I'm here from MMB. I decided to check U out.
Hopefully I will be able to meet ya at CBC 2010~!

mom, thank you for writing these stories down. truly they will bless our lives. everytime i sing a song dan doesn't know, he wonders if it's a Bagley Song. we always talk about grandpa jiggs and his little habits. what a wonderful man he was.

I love stories about Jiggs and June. Thanks for sharing them. Its fun to see how he grew up and see a whole different side to him I never knew.