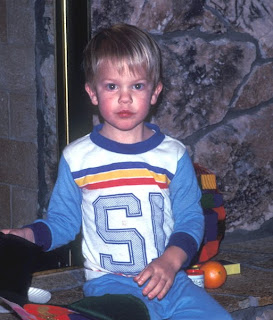 Back in the day, distressed furniture was cool. All the fancy furniture stores sold armoires, dressers and hutches with fake scuffs and scratches, and faded faux finishes. Saving hundreds of dollars, we created the real thing. Our coffee table looked unfashionably new but we topped it off with a couple of brass ducks. The kids took care of the rest. Eventually we had a coffee table to rival something out of a 17th-century farmhouse. The ducks sat contentedly in a pool of gouges.

While on a little getaway, Dee bought me some smaller ducks of the same brass. Late that night I unpacked them and put them on the coffee table. The next morning when the kids raced upstairs to the kitchen for breakfast, Micah's footed jammies skidded to a stop. He did a double-take in front of the living room and squealed, "Oh my gosh you guys! The ducks had babies!"

It's easy to jump to conclusions when you don't have all the facts. In fact, it's sometimes easier. I remember writing my first research paper in 6th grade. It was about Magellan. With my little recipe box and a stack of 3x5 cards, I went to the Evergreen library and started exploring the card catalog. Whenever I discovered a fact about Magellan I'd jot it on a new card. The research was enjoyable, the time flew by, and I was startled when my mom tapped me on the shoulder and said it was time to go home.

Somehow I never got back to Magellan that weekend, and the due date crept up. Around midnight one Sunday night (even then I wrote best in the wee hours) I got out my cards and strung the facts together for my paper. Unfortunately I ran out of facts before the conclusion, so I took a flying leap. 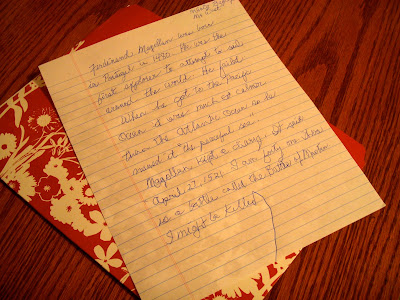 Mr. West wrote on my paper, "A clever angle." From then on, I wrote one paper per class using this tactic: when I ran out of time or material, I killed my character off with a long dying squiggle. I continued to get rave reviews, until 9th grade when I had Mrs. Hathaway. Forgetting I'd had Mrs. Hathaway in 8th grade, I turned in an assignment where Anne Frank died right in the middle of her diary.

I expected the usual A, so I was surprised when the papers came back. At the bottom of my book report, right after the C-, there was a little note. "You've jumped to the wrong conclusion. Check your facts. And this ending was better the first time."

So this week I'm fact-checking. Orlando Bagley's father was married twice: one record says the first wife was his mother, and another says the second one was. A third record has his grandmother listed as his mom. And the same Orlando died on six different dates. Hmmm . . . Is somebody reusing my favorite ending? Corroborating all the facts is tedious work, but I don't want to jump to the wrong conclusion.

~Type up a sheet of your vital facts and file it with your important papers. Most people in the USA don't know their grandmother's maiden name! Make sure your grandkids know yours.

~Ever jumped to the wrong conclusion? Write a post about it.

~Record a memory of someone saying something that still makes you laugh.

Email ThisBlogThis!Share to TwitterShare to FacebookShare to Pinterest
Labels: My Heroes, The Write Idea, Writing

My family tree is full of people who changed the spelling of their names, never knew their own correct date of birth, or don't want to talk about the skeletons in the closet. But they are MY family.

Don't tell McKay that secret. He'll try it out on all his papers and I don't think his English teacher will be quite so forgiving.