The Human Race: Set Your Own Pace

"Is there really a human race? Is it going on now, all over the place?"
—Jamie Lee Curtis 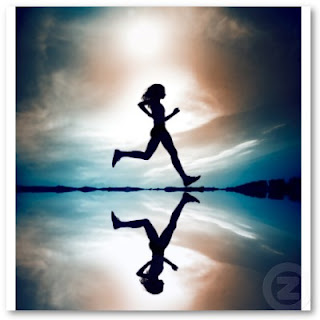 At twenty I started out at my own steady pace. 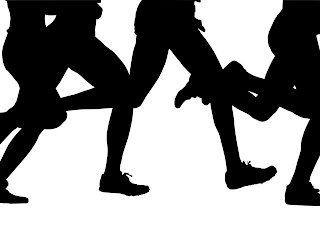 At thirty I ran faster. I was losing face. 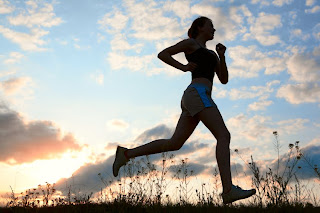 At forty I stumbled late in the day. 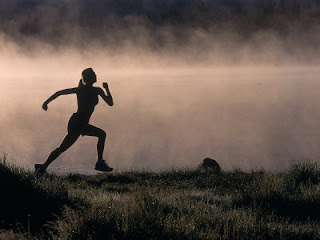 At fifty the finish line seemed further away. 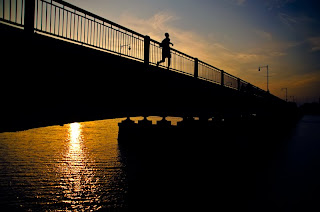 At sixty I wonder:
How long is this race, anyway?

Do you ever feel you're running faster than you can?
Years ago a well-meaning teacher set a goal for herself and included the whole class in her challenge. She was going to do a good deed, something extra, outside her normal responsibilities, every day. Each week she passed around a sheet to sign if we'd met the goal, which even included a place to record how many "service hours" we'd given. I was totally caught up in what became a contest to be "the most charitable woman."

Looking back I realize how nutty this was. I had a husband, seven kids and a dog at home who needed to be fed. Bedraggled plants begged for water from their macrame hangers; the dryer beeped endlessly; the closets glared messily, all calling for my attention. Teenagers sat in class every Sunday expecting a lesson, and great-grandmas called, wondering when I was coming to visit. Birthday cakes, haircuts, ear-aches, dance lessons, science projects—none of these counted as good deeds. They were my normal responsibilities.

Although I was running as fast as I could go, I felt like a failure because my to-do list left good deed unchecked more often than not. When the weekly sign-up sheet came around to me, I was embarrassed to pass it on, knowing I looked pretty uncharitable with my meager service hours.

Years later I was in a class on budgeting. The teacher cautioned us about living beyond our means—spending more than we had. Suddenly it dawned on me: I have 24 hours a day. Circumstances already claimed most of them. Setting goals with time I don't have is living beyond my means. One woman's finish line had become my stumbling block.

Misty wrote a cute post about her New Year's Resolutions, reflecting on the baby books she hasn't started since her twins were born. But how many baths has she given? How many late nights and early mornings has she put in? She probably doesn't even have time to count the appointments to the obstetrician, and then the pediatrician, that have kept her kids healthy. Misty's running a different race right now, pushing a triple jogging stroller at full speed.

Don't despair young moms. Someday your course will lead back to your baby books. In the meantime, give yourself a breather, and skip once in a while. 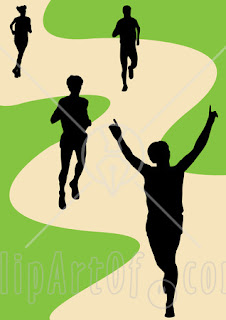 There's no human race. The run itself is the pay.
Where am I going in such a rush, anyway?

Email ThisBlogThis!Share to TwitterShare to FacebookShare to Pinterest
Labels: Beliefs

I remember those days. One day, I sat down and cried repeating, "I'm not Wonder Woman" over and over.

It's always good the hear that again and again. I don't know, there's at least a few days a week when my brain is out to lunch, making crafts, planning awesome meals, decorating my house, but my body is sitting sitting amongst four stickies licking their peanut butter and jelly. It's definitely not picture perfect.

I just love you.

So, so true. Why can't we ever look around and appreciate ourselves for all that we do RIGHT NOW?

Brilliant and encouraging. (As usual in the Oma du Jour!)

Love this post too.
Thank you.
I am just loving you lately!

lovely post, all mothers should pat themselves on the back and then hug each other, because we are constantly serving. don't hurry, be happy.