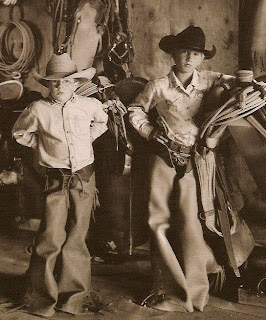 We went to a Cowboy Party on Saturday. It was a real Do. We're not in the Do circles--we're more Done, if you know what I mean. But I'm glad we did this one.

It was a charity event to raise money for school libraries. Two hundred guests were shuttled up a private mountain to a private cabin, which was the size of a lodge. It was incredible. Because it had rained during the afternoon, the air was refreshing and cool, and from the deck we overlooked a meadow with trees dancing, dressed in crisp sunshine. Giant logs served as beams and rafters; rustic furnishings were sophisticated and comfortable at the same time.

The kitchen dining nook had seating for 25, with a work space, counter and island featuring three sinks, two cook tops and a double oven. Ten caterers were arranging appetizers with lots of room to maneuver. The living room had four separate seating areas, but still seemed cozy, with a grand piano and a two-story rock fireplace.

In the master bedroom, a substantial carved chest sat at the foot of a four-poster bed. At the press of a button, a large flat-screened TV emerged from the chest for late-night viewing. Of several suites and bedrooms, my favorite was a big dorm with eight double bunkbeds, topped with fluffy feather ticks. What an ideal place for little cousins to tell ghost stories!

Throughout the house paintings by local artists were displayed for a silent auction. We saw bids upwards of $15,000! The food was all donated by high-end Park City restaurants, and served al-fresco down the hill at the stables. (These stables held 15 horses, as well as a full kitchen, bathroom and family room.) Tables were set with china, crystal, and silverware wrapped in red cowboy bandannas, and the entrees were rack of lamb and duck. Horses poked their heads through the stalls and whinnied and neighed through dinner. Amazingly, the only aroma was barbecued meat, and there wasn't a wasp, fly or bumblebee anywhere in the vicinity!

A cowboy singer serenaded us while we ate, and afterwards we were ushered over to the bleachers at the rodeo corral. Doesn't everyone have a rodeo corral in their backyard? An authentic, fast-talking auctioneer took over and sold chic jewelry and more artwork. Guests held up their numbered cards and battled each other while the auctioneer egged them to go higher and higher in their bids. We were amazed at the generosity of people!

High school rodeo riders then galloped in carrying the flag, and we watched barrel-racing and calf-roping with intermissions for cowboy story telling, featuring grade-school kids. The skies were dark and a few raindrops made the leaves glimmer as a dazzling spark of sun turned the fields a fiery gold.

Just before the drivers arrived to return us to our cars below, it was announced that over $200,000 had been raised to replenish public school libraries. The hospitality of our hosts included the stunning scenery, and a hundred volunteers had contributed all of the services for the evening. The artwork, jewelry, entertainment and food were donated. In the darkness the house on the hill came alive with twinkling lights. It seemed a fitting metaphor for what will soon happen in the children's library! 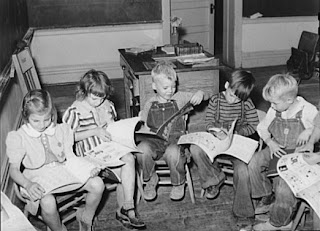 That sounds like quite a party. What did you end up wearing?

What a great description of a great party! And yes, what did you end up wearing?

Wow, sounds extremely swanky! I've been dying to know what you wore to the event.