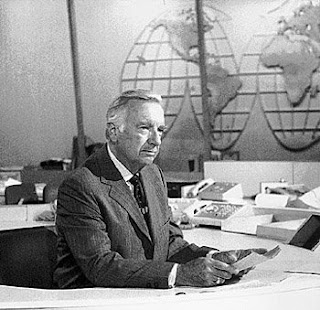 Walter Cronkite
Forty years ago I watched the Democratic National Convention. Walter Cronkite was my man on the scene and, with tears in his eyes, he told us the way it was. The year was 1968 and we had seen horror and ugliness, with brutal race riots, black teenagers murdered, an escalating war and student protests.

In April Martin Luther King had been assassinated, which sparked more riots and bitterness. At the California Democratic convention Bobby Kennedy was shot and killed in front of everyone watching TV that night. It had been a year of heartbreak.

The Democratic National Convention was held in Chicago. Mayor Richard Daley was well-prepared to deal with planned protests. Some would say wickedly prepared. Haynes Johnson was a reporter there, and he said, "The amphitheater where the convention was held had newly bulletproofed doors. The hall itself was surrounded by a steel fence topped with barbed wire, and inside the fence clusters of armed and helmeted police mingled with security guards and dark-suited agents of the Secret Service. The National Guard had been mobilized and ordered to shoot to kill, if necessary."

I'll never forget what I saw on TV. Chicago police officers took off their badges and waded into the crowds with bully clubs. Tear gas and hoses were used on protesters, reporters, photographers--even some citizens sitting on their porches were beaten! Over 500 demonstrators were arrested, and two hundred people, including policemen, were injured in the bloody riots. 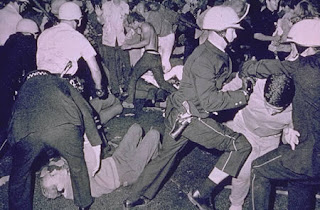 Haynes Johnson reported, "I was a commentator on the Today show, broadcasting live from Chicago. Early Friday morning, a few hours after the convention ended, I saw a group of young McCarthy volunteers huddled in the lobby of the Conrad Hilton Hotel, where I was staying. They had been bludgeoned by Chicago police, and sat there on the floor with their arms around each other and their backs against the wall, bloody and sobbing, consoling one another. I was filled with a furious rage."

I was almost 19 that summer and I wondered, after all the turmoil of that year, if the world was coming to an end. It was a dark time for the United States.

But things have changed. 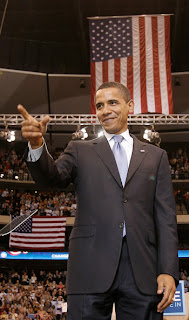 My daughter-in-law, Candice, was a witness to a very different and historic Democratic National Convention yesterday in Denver.

Because of her work on the Obama campaign, she scored a ticket to watch him accept the nomination. She arrived several hours early and sat just a couple of rows up from the field in the end zone, where she had a perfect view across to the stage. John Kerry, Michael DuKakis, Al Sharpton, Jesse Jackson, Anderson Cooper and other pols strolled past her seat while she listened to a Sheryl Crow concert and observed patriotic attendees.

There was a palpable feeling of good-will and camaraderie in the crowd; people were friendly and enthusiastic, on good behavior. One black woman caught her eye. Dressed up in church attire in respect for the occasion, she remained standing and cheering throughout the proceedings, waving a giant American flag, with tears bubbling up in her eyes.

Candice said it was an emotional, moving experience. The Average Americans segment was the highlight of the evening for her. Personal stories were given by regular folks who explained why they would vote for Barack Obama, and she said they were sincere and convincing.

The crowd was pumped up, yelling and cheering when the first black candidate for president of the United States was introduced. Even after eight hours in the sun the enthusiasm was overwhelming. When the video started the clapping dropped off, and Candice said you could hear a pin drop in the stadium as they were caught up in the story of Barack Obama. She described his acceptance speech as awesome. "I felt honored to be part of such an important moment. I was proud to be an American."

When I was not quite nineteen, 40 years ago, I thought the world was ending. Maybe that world has ended. It's certainly changed for the better.
Posted by Travelin'Oma at 11:38 PM

I remember 1968, of course, and I was appalled at all that went on. It seemed to me that chaos reigned. I am so pleased that nothing anywhere near that happened this time.

I did a bunch of research on 1968 for Brad's 40th...it really was a scary time. I'm just grateful that in the midst of uncertainty, mothers were still having babies and raising them up right. Look at all the great people who've been born since then!!

I remember that convention too, and my husband (who is 13 years older) really remembers it as he was actually in Chicago as a delegate

One of the few good things about getting older is actually being apart of history and remembering things that happened instead of reading about them. Even though those things were not good times, it is interesting to have been a part of them and then to see that great speech the other night and to be able to reflect over the changes that have taken place..among all the worrisome things that have taken place in this country there are some great things happening as well.

You know more stuff about 'stuff' than anyone I know! I loved being taken back to another time period. I was reminded of the obstacles that this country has overcome, and some that we still struggle with today.

Can I get a YEE-HAW for Obama?

Great post! As a canadian, my opinion, is useless, but many of us, do keep abreast of whats going on next door..I really hope that the US votes for this man, he would stand for so much change on so many levels. I watched alot of the campagne on tv myself, but my mom eats and sleeps politics, american and canadian, so we all know not to call her these days, as she is perched on the edge of her seat watching all the goings on in the US right now...and we will be having elections in Canada soon also so ....mom will be busy lol!