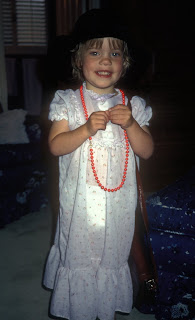 This is my baby. In real life she's grown up and having a baby of her own in a couple of weeks, but she's still our Mini Mart. For the last two weeks she's been staying at our house, and every night she and I have planned to do a double blog. We've giggled hysterically over our clever ideas until 2:am or so, and then realized that we aren't really very funny. However, Min has provided me a lot of laughs over our 27 years together. For Example:
One day when she was about six we were on our way to Mervyn's. She said, "When we're shopping, act like you don't know me. I'm going to pretend I'm a midget." 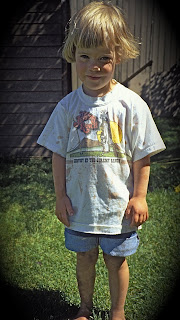 After painting the playhouse
A few years later we were walking out of a cafe in Salt Lake City and someone held the door open for us. Min said, "Merci." The woman asked where she was from, Marta faked an accent and said, "Paris." Afterwards she explained she wanted to give the people a little thrill thinking they'd met a foreigner. 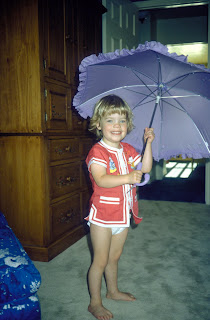 Another time we were sitting at the kitchen table when we heard Dee come in. Out of the blue Marta whispered, "Mannequin!" and suddenly froze in position. She wouldn't unfreeze and come out of her new character until I explained, "She's being a mannequin." After that it became a routine game, and everyone had to become a statue until the arriving person broke the spell by saying, "Mannequin." One night Marta answered the door and her sister's brilliant and solemn new boyfriend was standing perfectly motionless in a silly pose on the porch. Min squealed, "Mannequin!" and he was embraced wholeheartedly as a brother-in-law on the spot!

Child #1 was disciplined for taking books off the bookshelf when she was only 18 months old. (Sorry, Gabi.) By the time #7 came along we'd been mellowed. When we'd hear Mini whine or cry with the other kids, we'd call out, "Just give her anything she wants!" Luckily our easy-going style was offset by the sternness and high standards of her six older siblings, and in spite of our newly discovered relaxed attitude, she turned out undamaged.

Last night I invited Min to write a guest post on my blog, but then we got distracted by some horrifying reality show (about a family with twins AND sextuplets) and it was just too traumatic to return to mere blogging. I forgot my request, and she packed up and left with her newly bar-examined man, and I figured I was back on my own. However, tonight I noticed she had started a post and saved it as a draft. The ideas here are typically her, in her own mini style, and well worth sharing even though she didn't finish it up. A partial of mwrites is a complete facelift for a saggy TravelinOma!

(welcome to an official mwrites blogpost.)
mwrites a to do list
01. thank the mailman.
02. pay for the next happy meal in line.
03. pick up someone's recycling.
04. leave money in the meter.
05. read something uplifting.
06. rearrange your books by color.
07. hold the elevator.
08. dig up old photos.
09. watch Extra with your mother. because you love it.
10. then watch Law & Order with your mother. because she loves it.
11. and then watch Big because you haven't seen it since you were like 13. 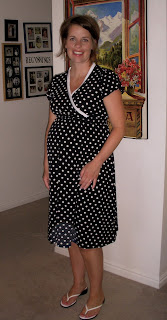 I think the movie rubbed off, because she's getting a little bit big. I hope her baby is as much fun for her as mine's been for me. It's been a Mini-Vaca for Oma and Opa, but we won't see Min again until she's produced a tiny little midget!
Lots of

Email ThisBlogThis!Share to TwitterShare to FacebookShare to Pinterest
Labels: Cousins Club, My Heroes

Good luck, Min! You seem to have been quite the character. I hope your baby will be the same!

I just made the connection that you were Marta's mother last week...and it just made me love you even more. No, I don't know Marta, but I wish I did! I love her blog. She seems like quite the character!!

I have noticed that I am a lot harder on my first than my second...and I am sure it will get more relaxed as children continue to come. Those poor first children.

Marta, I have to say, will always have the ability to make me laugh for hours on end. She is darling, spontaneous, clever, and fun. I just adore her. I can't wait to meet her little midget.

And Mannequin? BEST GAME EVER.

Two lovely ladies, two excellent writers, and two incredible blogs! Don't ever stop. What would I read during breakfast? (I'm so over USA Today after reading you ladies!)

I am so glad I've known Marta through all the stages of her life. She is a sweetie and I'm sure you have had fun together. That list is really her!

I had computer lessons from Min while she was here and she taught me a brand-new way to link. I even wrote myself a post-it and stuck it on the computer.

But I did it wrong, and the first few of you who read this post got linked to some unrelated blog also named MWrites. Sorry. It's a fine blog I'm sure, but not the one I was after.

I've fixed it and you'll now find the authentic, real and original mwrites when you click on the link!

hee hee.. mom, i loved this post! thank you! it made me laugh aloud. what silly things we do.. i really do take after my mother! you are the only one who puts up with my crazy antics. i guess blogging is something we can only do while we're apart, missing each other.

thanks for the perfect vacay getaway. it was so dreamy and fun to hang with you. plus, i got to know vincent and his ribs, donny and his brothers, and foyles and sam! and you got to meet Yucky! xoxo.

Right when I thought she could not get any cuter! I just love that baby of yours!
The time you spend with Marta makes me miss my own mother (in the best way of course)

Loved hearing these stories about Marta! The two of you seem like two peas in a pod to me, and, like keri(th), reading both your blogs is always a highlight of my day.

Good luck to Marta when the new little one arrives. This was such a great post Marty....what a wonderful girl she is...and what a great mom you are.....so much love.

Do we see some great similarities here? I hope so.