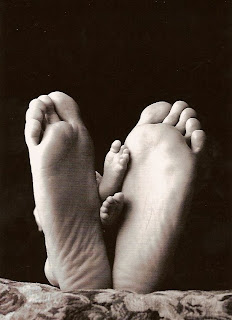 I can't tell which is my best foot. Is it the one that could pass for a moccasin: brown, dusty and genuine leather? Or is it the one that has been sanded, buffed, filed and polished? I walk on both of them, but I have to admit, I'm more comfortable with a few callouses. A fresh pedicure makes my feet look prettier, but they feel flimsy somehow. They serve me better when they're rough around the edges.

Should we shine ourselves up with spit and polish, or be authentic? I admire people who let their flaws and callouses show. I'm suspicious when someone is too good to be true, because I figure they aren't. I wonder what scuffs they're hiding. But it takes humility to confidently be the real deal.

A refined, serene friend of mine had a disastrous marriage many years ago. She was humiliated by events that were public and flagrant. Later she remarried and moved someplace else to rebuild her life. Nobody knew anything about her past, and she was everything she appeared to be--happy, loved and respectable. What impresses me about her is her honesty. Whenever it could be helpful to a friend, she shares her experiences without embarrassment. She is authentic.

Another acquaintance has a similar past, and I knew her when. She puts her best foot forward in every situation. Nobody knows about her unhappy background, nor would they guess. I am equally impressed with how she has moved on, but I sense that she is worried that her new friends might find out and lose respect for her. I can tell she hopes I'll never bring up her former life, to her or anyone else. And I don't want to step on her toes.

It's ironic, though. One of the women she has become buddies with has the same story as she does. I may be the only one who knows how much they have in common, but I could never point it out. Because they are both so uncomfortable about acknowledging their challenges, they might miss out on the other's empathy. They're tripping over a friendship just because they each have their best foot forward.

I am off balance if I worry too much about which foot should go first. One side of me is in good standing, while the other side is stumbling down the path. That's authentic Oma. As the oldest kid, I was always told I should be a good example. It was a lot of pressure, and it was pointed out to me that I fell short. I wondered if I was just supposed to show my showy side, or if I could sometimes be a good example by being a bad example. What about all those rough spots? Was I supposed to hide them all the time and pretend they weren't there? Isn't that kind of dishonest? Should I act like I am, or like I want to become, or like others wish I'd be?

I've polished myself, but my self usually shines through the layers of gloss, and the gleam dulls to a glimmer. I put my foot in my mouth often enough to know I'm not walking through roses all the time. My feet aren't all they're cracked up to be. I know it, and everybody who knows me knows it. So, while I get pedicures every once in a while, the chips in my polish are pretty noticeable. I've decided I'm OK with that. Although I have a best foot, when it's dragging behind I'm as authentic as a leather moccasin.

Do you put your best foot forward? Have you got a pumice stone that really works? Are all those cracks slathered with vaseline until they're invisible, or even healed? Or does your polish get smeared before it's even dry?

Email ThisBlogThis!Share to TwitterShare to FacebookShare to Pinterest
Labels: Point of View

I think I'm the opposite. I tend to be quite self-depricating because I'm embarrassed to show off any of my "good" qualities. I figure if I point out the bad and make jokes about it all the time, then the bad might not SEEM all that bad after all.

what if those closest to you don't want to see your calloused feet and so you always have them polished?

I'm kind of like you Miss Oma. There are times when I don't know which side of me to present to others.

I'm a pretty loud person, and often, for newbies, they don't know how to take me. So, I tend to start off slow and then work my way up to my "true" fun loving self.

This should be required reading for everyone. Excellent post.

Having just returned from my 50th reunion, and though wanting to put my best foot forward, but unable to get a pedicure before I left, I did one myself. The heel creases and cracks were showing, and I decided that if that's all people were going to focus on, I didn't care what they thought.

I also didn't re-color my hair (although my hairdresser tried his best to convince me) and I didn't wear a girdle, though it might have helped my dress fit better. At this age, I am (mostly) comfortable with my warts, etc. Luckily, I think most people looked beyond them and saw the real me. I hope so.

really good post..made me think...luckily i got to walk in your footsteps and they were great ones to follow...i think i would like to be all polished..but like you...my real self pokes through...but, i think that's really the best way to be...yourself.....

I've only had two pedicures in my lifetime and I never paint my toenails--and when I think about it in the context of this analogy, that pretty much explains me to a T. I'm pretty much an open book--what you see is what you get. But it's taken me a long time to get to that point, and some things happened in my life that forced the issue where I realized that it takes an awful lot of energy trying to pretend I'm something that I'm not. So when I was able to let that go, I've been much, much happier ever since.

This is the kind of post that should win awards! You are such a fantastic writer. The cleverness is above and beyond, and I love it.

Who wouldn't want to present their polished side? The only problem with that. is eventually the fungus becomes visible and the jig is up.

When I truly know and enjoy a person, I am completely me and all of my flaws, loudness, etc. are in plain view.

When I am apprehensive or uneasy around someone, I tend to keep it all inside and smile politely.

I guess the goal is to be comfortable enough with yourself and who you are no matter the company. I can see that starting to come together in my thirties, but I think it will take until my 80's to actually accomplish.