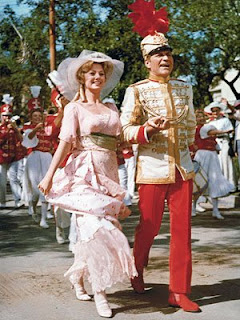 The Music Man and Marian

Remember Harold Hill? He's the guy who sold the whole town uniforms and instruments, promising he'd turn the kids into a marching band. Unfortunately, as a con-artist, he had no expertise in teaching music. Persuaded by his charms, the children thought the music, and imagined themselves playing the trumpets and trombones. They were convinced they were musicians until the Wells Fargo Wagon came and the goods got delivered. The think method had not been enough. The kids couldn't play a note, and the parents had lost their money.

Ready to disappear like a thief in the night, Professor Hill was waylaid by his own true love. Marian the Librarian prevailed on him to stay and face the music. And, in true fairy-tale fashion, there was music! At first the band sounded grating and squawky, but with a little thought (and imagination) they paraded down Main Street in triumph.

When I was younger, I thought this was a great story of faith. I now think it's a great story, but I realize faith has more to do with accepting than wishing. Faith is not just believing things will turn out like I want them to. It's about taking things as they come, with the confidence that, with the Lord's help, I can handle whatever happens. It's a positive outlook, even in the face of difficult realities.

Do you ever wonder if it's bad luck to think about bad things? I do. If I accept an unhappy ending, maybe God won't bless me with a happy one. Maybe I won't be showing enough faith. But as I've seen bad things happen to good people, I've realized that faith can be strongest in hard times. A friend of mine lost her son many years ago. She said, "At first I asked, 'Why me?' Then I started to ask, 'Why not me?' I have the faith to endure it." She's an example of faith.

Waking up each day with a cheerful disposition shows faith, especially when your feet hurt and your back aches. Good humor, gratitude, thoughtfulness, concern for others, particularly when you're worried about your own personal problems: these are gracious qualities that demonstrate faith. Holding your head up in the embarrassment of defeat, shaking your gloating friend's hand, and smiling in spite of humiliation: that's faith. It's real faith that, with your renewed efforts, the Lord can turn this around for your good. Winston Churchill said, "Success is not final; failure is not fatal. It is the faith to continue that counts."

Professor Hill couldn't teach music, but he taught me a lesson: when I'm caught unprepared for a performance in life, I hope I don't turn tail and run. I hope I, too, can face the music. I want some character and humility to join forces with my positive thoughts so I can deliver true faith that God will support me in what I have to do.

That doesn't mean I don't always hope for the best. I am thrilled with happy endings. I scan the horizon for them every day. I want the Wells Fargo Wagon to be coming down the street. . . with something. . . very thpethial. . . just for me! (But, my faith does not depend on it.)
Posted by Travelin'Oma at 2:10 AM

You have always been a "glass half full" kind of person. I love that about you. It's hard to think of the positive ending we want sometimes.

It's hard to type with tears in my eyes...You have beautifully expressed what I have felt this last year. With a shattered leg and shattered hope I fought to walk. Five months into the ordeal, just as I was beginning to see light at the end of the tunnel, my 48 year old brother unexpectedly passed away. Then 5 months later I got to meet new buddies at BP. Your blogs bring me laughter, joy and the chance to cry. I love happy endings and feel that my brother is enjoying the truest of happy endings. May we all hang on tight, come what may.

I have a friend that always says "it's not over until it's over" a sentiment which I feel can get me through sad things and put a positive spin on anything, because even in the midst of heartbreak or crisis, no one knows how things might turn out and it might turn out for the better for everyone concerned. That is what I am learning about faith.

Everything I know about faith I learned from you.

beautiful. the music man has always been a favorite of mine as well. i love you positive outlook on life. thanks for the inspiration.

I read this post at a very crucial and difficult time this week, and I felt completely uplifted and reminded that I must have strength and courage to fight for what is right.