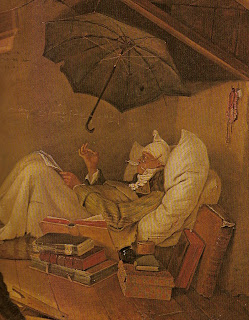 Being a writer is not all it's cracked up to be. I know, I know, John Grisham is smart and rich. Daniele Steele is gorgeous and rich. Dan Brown is famous and rich. They're on Dave Letterman, and the Today Show. But the rich and famous ones are few and far between. The rest of us are like this guy. He is The Poor Poet.

When I first met Dee in Salzburg, we went to an art store to look at postcards. There were famous works of art, all filed alphabetically by artist, and Dee introduced me to Carl Spitzweg, the Norman Rockwell of Biedermeier. We have collected many of his prints over the years, but this is by far my favorite.

I've just finished a book called One Continuous Mistake, by Gail Sher. The subtitle is Four Noble Truths For Writers. Sher says as a writer, you don't write because you should, but "because if you don't write, you will feel something terribly important is missing from your life---and nothing, including prayer, meditation, exercise, money or love will make up for it." I identify with that.

She goes on, "I know a doctor who wishes he could teach literature. I know a lawyer who secretly writes children's stories. I don't know any writer, however, who hankers after an alternative profession. If you are a writer and you are writing, there may be problems but never doubts."

The Poor Poet can't help himself. He has to write. He obviously can't afford a decent roof over his head. (But doesn't he look cozy?) Because he's in a painting he's been validated. We all know he's a legitimate writer. It doesn't matter that nobody's read his stuff, or that he doesn't have an agent or a publisher. He's for real.

Recently I was quoted to myself. Not the cool way, like in Harry Met Sally. More like,
"My friend wrote this poem, and I thought you'd like it." It was a poem I wrote several years ago and passed out freely. Apparently this friend of my friend recieved a copy. I've written many poems because people have asked me to, for small publications, talks in church, graduation speeches, or other special occasions. I love to write, and am flattered to have any readers at all, so I would never dream of charging someone, even though I have spent days, and even weeks, working on a piece. Most of the time nobody even knew I was the one who wrote it. I didn't care. But to have somebody else take credit for it really bothered me. And how do you say, "Oh, I wrote that!" ten years later?

What does it matter? Dee always says, "You can get a lot accomplished if you don't worry about who gets the credit." If I had waited for somebody to validate my ability before I wrote anything, I wouldn't be a writer. And a writer writes. The only way to fail at being a writer is not to write. But it would be fun to be rich and famous, too.
Posted by Travelin'Oma at 1:30 AM

Email ThisBlogThis!Share to TwitterShare to FacebookShare to Pinterest
Labels: Writing

i am so glad you wrote this, along with everything else you write. you are the real deal, oma. whether anyone says it or not, you've got the guts to put it out there and let it be read.

i am a fervent reader of yours and you have succeeded in my book.

Well said, Oma. I have been writing, and, mostly, not publishing, for most of my life. I have never NOT written, in one way or another. It gives me a great deal of pleasure, therefore, to be writing a blog and getting feedback. It is a good outlet.

you have hit it right on the head! (just why is it a writer can't get any respect??) and yes, it would be nice to be rich and famous too, but I'm starting to believe that I simply must continue to write and if I'm meant to be rich or famous it will come in its own good time