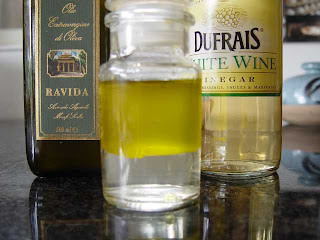 Julie and I were making dinner. It was the first week of freshman year, she was one of my new roommates, and co-chef. This was our cooking debut. The girls in our apartment had voted to rotate kitchen duties and we had already sampled our other roomies first attempts.

Earlier in the week, Sally and Clarice had made 7-Layer Dinner, some sort of horrible tomato-type casserole, that none of us ate, except Clarice. Clarice was tall and skinny, and a year older than the rest of us. She had a superiority complex, and obviously thought she was the coolest. We, obviously, thought she was a total dork. She had announced (several times already) that she had "thyroid" and could eat anything without gaining weight. She proved it by inhaling all seven layers of Sally's casserole in one sitting.

Cami and Sheryl had made barbecue ribs, which were very tasty, and Clarice polished those off as well. Julie and I were attempting meatloaf, with frozen peas, baked potatoes, and green salad on the side. Very ambitious.

Something was needed to enhance the lettuce, so we decided on an oil and vinegar dressing. Neither of us had ever made it before, and we didn't have a recipe, but it didn't seem hard. Since we had no oil, we melted some Crisco in a saucepan, mixed it with a little white vinegar and a dash of salt and pepper. We let the flavors "blend" in the fridge while we cooked everything else. When it was time to serve, the peas were still frozen, the potatoes were rock hard, the meat loaf was bleeding in the middle, and in the hub-bub, we forgot about the salad dressing.

Clarice came home late from class that night, and by then the disastrous dinner had been carried out to the trash bin. I walked into the kitchen where she was studying at the table. She was eating some white congealed mess of goopy stuff--the salad dressing! "Hey, this tapioca is pretty good," she said. 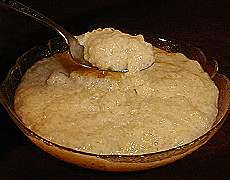 Names have been changed to protect me.
Posted by Travelin'Oma at 1:07 AM

Email ThisBlogThis!Share to TwitterShare to FacebookShare to Pinterest
Labels: Memoirs

I love that story! Your cooking got a lot better, thank goodness!

that's hilarious..did you ever tell her?

That is so funny. Payback for someone who brags about being able to eat whatever they want and not get fat. Guess that includes literal fat.

now did she *really* think it was tapioca? that's just gross.

"Those were the days!" (think and sing like theme song from "All in the Family") Do you need to borrow my red dress? OK, just don't sweat it! Good times!! Love, Sheryl (you must not remember my experience with Cheryl Brown and this name)