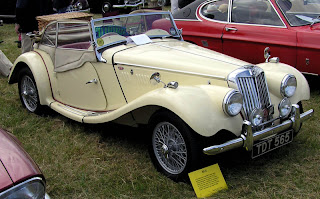 I could own this car right now. When I was 18 my boyfriend spotted a car just like this for sale: $1300. He wanted us to buy it together. Although he was on the brink of leaving the country for a couple of years, he had $300 for the down payment and thought I could drive it and make the payments while he was gone. It seemed like a great idea, but my parents thought otherwise. The car was sold to someone else. But just think about it: although I didn't end up with the boyfriend, I could have ended up with the car! Every time I see an antique auto it makes me pine for my first love--a yellow '53 MG with running boards.

These are the cars I've driven instead.
(These are example photos, of the same year and make, not necessarily color.)

My dad's white Valiant convertible, stick shift, which I drove into a brick wall.

My mom's light blue Fury. Could it have been worse? 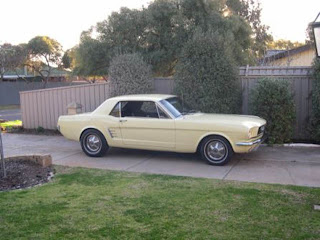 My dad's redeeming purchase, a '66 yellow mustang (ours had a black vinyl top.) 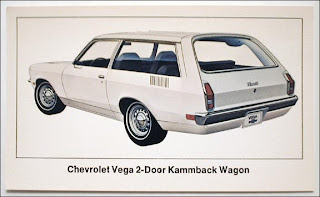 Our first new car in 1972. The four kids just tumbled around in the hatchback without car seats in those days. What were we thinking? 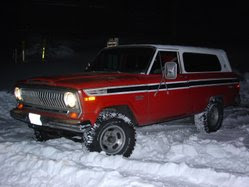 A Jeep Cherokee in blue and white. Josh drove this car through our garage door at age two. Dee got accustomed to backing out quickly while we waited for the door to be replaced, and the day after it was re-installed, Dee backed the same car through it again. 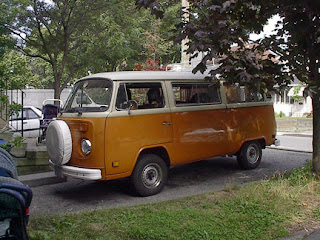 The yellow VW Bus I hauled our seven little kids around in. 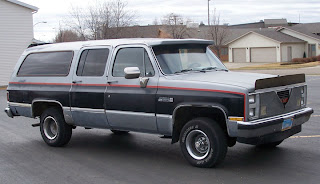 The brown and white Suburban I hauled our seven big kids around in.
(This was diesel and you could hear it coming a mile away.) 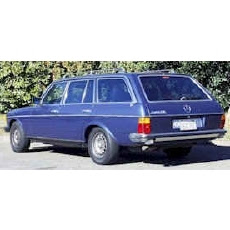 This was my luxury car. It was a gray Mercedes station wagon, also diesel, and very gutless. People flipped out over it, unless they were driving behind me up a hill. Then they flipped off. 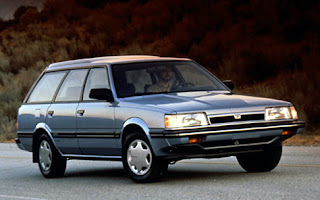 A wonderful little all-wheel drive Subaru, in maroon, that could climb all our mountains in winter. 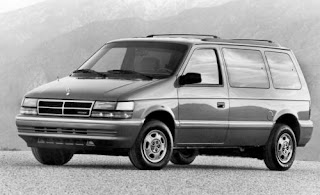 Somebody saw me and thought, "We ought to invent a mini-van."
My first one was a gray Dodge.

The kids call this "The Egg." I drive it today.
I thought I would want a little Oma Car to tool around in after all the kids grew up, but I love having the extra space. I can haul all the groceries, plus a couple of car seats for grand kids, and still have room for a passenger or two.
This car has been from Seattle to Boston, San Diego to Philly, up to Canada and down to Phoenix, and she just keeps chugging.

It would be fun to drive that beautiful yellow automobile around the block a few times, but I don't think it could have taken me where I needed to go.
For that I needed substance, not style.

Email ThisBlogThis!Share to TwitterShare to FacebookShare to Pinterest
Labels: Memoirs

Love this post. Our first car was a 1964 Volks Beetle, pearl white with apple red interior, and I learned to drive a shift.

Now I am on my 4th van (Chrysler T&C) and I love it. It works well for delivering flowers and driving a load of grandchildren too! Maybe someday they'll make a convertible van? Then I'd be in Heaven!!

but where's the banana? I'll be sending you over photos shortly to update the post. ;)

I left out cars that were designated for the kids, or for Dee (his bright red Porsche, the Bengal, the Banana, the "heat and music.") The neighbors had to live with 5 cars clustered in our driveway at a time, or various car part spread out over the front lawn, but I want to keep my new blogging friends!

I think the Vega is the car that ran over my cat, Blackie.

Love the Yellow Mustang. I remember my next door neighbor, an old woman named Poppy, had one when I was around 7 or so. And my dad drove from northern VA to NY in a cream colored VW Beetle. Not sure what color the interior was, as again, we are going back well over 30 years!

I loved the banana! WE always knew it was one of your kids driving by our house!

i don't remember any of those cars of moms and dads..just the mustang...my first car to drive was moms mark IV, then brother tom gave me his bmw....nice start

Marty, I about spit out my mouthful of water laughing at the comment you left on my blog!!! I am the one who does the flipping when it's called for. Brian yells at me for it just about every time, as I am not the one driving. Brian's biggest trick is flashing his headlights and muttering.