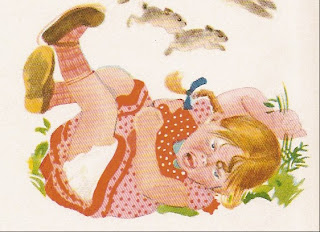 Illustration by Feodor Rojankovsky
I've retained a lot of my youthful characteristics. In fact, the two-year-old in me is alive and still kicking. I hate it when people tell me what to do! I just buck under pressure. Suggestions are good, and I will most often take well-presented advice. But I've never liked being patronized and I have never appreciated over-confident, presumptive folks sending the overt or subtle message that I couldn't make good decisions on my own. It is insulting, and it's wrong. God gave us worth. A person who tries to take that away is stealing the most valuable thing we have. Can't you just hear me screaming, "I do it myseff!!"

I watched Miss Potter last night (this is a spoiler, so if you haven't seen it, and are planning to, skip this paragraph.) I am bothered that her parents assumed they knew what was best for her, and that even as an adult she was intimidated into postponing a marriage to a man she loved, because they didn't approve. As it turned out, they might even have proclaimed they had protected her from disaster. They didn't. They couldn't have. What had happened to her wasn't planned out, or thought through; it wasn't expected or even desired. She had fallen in love. Her heart was already vulnerable, and what they saved her from was several months of happiness. She got the heartbreak anyway. Do parents have the right to make these kinds of choices for adult children?

In the movie, the father had been an artist in his youth. That was an unacceptable career path to his parents, so he studied the law. Why was it unacceptable? Who says? My inner toddler wants to scream at people who think they have all the answers for everyone else. An artist probably won't get rich, and maybe a lawyer will. Is that it? Is it so the parents aren't embarrassed that their son isn't in a profession? Although the movie took place 100 years ago, this is an attitude that is alive and well. People make judgments based on what is important to them, and then feel justified in imposing it on anyone else not so exceptionally informed. Perhaps the poor artist would have been happier than the rich lawyer. No matter. It was the artist's choice to make, not his parents. They had their chance.

When our own children are young we have the responsibility to teach them right from wrong. During their childhood we have been charged with providing for them, and letting them receive education and experience that will help them discover who they want to be. We set a standard and an example, and because they are dependent on us, we can rightfully expect respect and obedience to our just demands. But children are individuals, and not clones. We should be anxious to allow them to develop self confidence.

As they get older, they have the capacity and duty to make choices for themselves. It's their birthright. If somebody asks for our opinion, as friends, siblings, parents, we can advise, with the proviso that nobody is obligated to accept that advice. Otherwise there is a tantrum, a rebellion, a resentment that ruins the relationship. We deserve the liberty to make our own mistakes, and it's inborn to want that opportunity.

This land also had it's childhood, with a heavy-handed parent keeping watch. When the country arrived at it's teenage period it got angry over such control. It wanted more say. As a newly mature nation, it rebelled against what it now saw as tyranny and domination. As our country reaches middle age, we sometimes forget the feeling of being invaded and compelled. Like parents stuck in their ways, we assume that we are looked up to, envied, and have the responsibility of demanding the little guy become like us.

So now I'm coming to my main point. This horrible war. Why does our government continue to think the American way is better than everyone else's way? We are patronizing and arrogant to assume that the rest of the world would be better off if they were just more like us. Their values may not be our values! We have no right to speculate that "it's for their own good," "they'll thank us someday," "we have a responsibility to save, protect, train, and guide them."

Rick Steves, a noted traveler and lecturer, points out in an insightful interview, that citizens of other countries do not want a US passport. They have different objectives, and other directions. He reminds us that travel teaches us to respect various cultures. An excellent article in the Boston Globe says, "The real role of American troops in Iraq is now to try to keep a lid on the terrible violence unleashed by our own invasion." (Clashing Catastrophes by Ellen Goodman, 2007/09/14, The Boston Globe.)

When we interfere in other's lives because we think we're more enlightened somehow, we let their inner two-year-old out. There will be some kicking and screaming, hitting and biting. Human beings want to be out of control, or at least out from under it. I recognize the feeling. There's a little of that frustration left inside me.

Illustration by Mary Engelbreit
Posted by Travelin'Oma at 12:30 AM

Email ThisBlogThis!Share to TwitterShare to FacebookShare to Pinterest
Labels: Point of View

I've read a couple of interesting books lately which have made me feel blessed to have our government, even with all its imperfections. Red China Blues, written about China during the Maoist Cultural Revolution through the Tianemen Square tragedy and beyond by a Chinese-Canadian journalist and Nine Parts of Desire by an Australian journalist who travels throughout the middle east studying Islamic culture and life--both made me very grateful that we can speak up about what we don't like and we can do something about it. WE can throw tantrums and not be thrown in jail--we can criticize our leaders and not lose our jobs.

All we have to do is watch one episode of "House Hunters International" when Americans are looking for houses abroad. It makes me CRINGE!!! Nothing's good enough, big enough, classy enough. The selling agents don't say anything because they have MANNERS, but their facial expressions and body language tell it all. I DO love America, warts and all. I hate war. I hate racism, racial profiling, discrimination of any sort. I've never travelled abroad, but if I do I hope and pray I give the host country/countries a positive example of what a true American is...not these spoiled overgrown BRATS who should just stay in America and shut up.