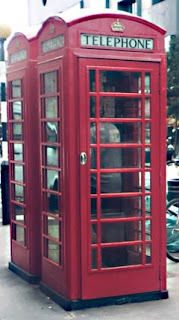 Micah lived in England for two years in the early 90's, when he was about 20. He didn't have a phone, and there were no cellphones or e-mail (sounds like a different century!) Weekly letters were our only mode of communication. However, every few months our phone would ring with his unexpected but welcome voice on the other end. If he happened to pass a phone box and he had 50 pence in his pocket he'd drop in the coin and call us just to let us know he was alive. The call would end when the money ran out, usually before we could even respond.

One night the phone rang a little after two a.m. Calls in the middle of the night are always startling and upsetting, so my heart was pounding when I answered. "Mom! I just witnessed a murder, but I don't want you to worry!" Click. There was no way to call him back and find out any details. Was he in danger? Had the murderer seen him? Did he need help? Where was he?

We didn't get the explanatory letter until ten frantic days later. A man had beaten his wife to death on the sidewalk outside the flat. Micah saw it through the window, and ended up calming the man down, and calling the police. Eventually he even had to testify in court about it. But, luckily, his phone call saved me from ANY worry....yeah, right!

Have you ever had a phone call that scared your socks off?
Posted by Travelin'Oma at 11:58 PM

Yes, I once got a threatening phone call saying that my husband had better leave this guy's girlfriend alone because he was going to kill him, he knew where he lived, etc. It was horrifying. Come to find out...the call was meant for another Josh with the same last name. Good thing - cause if it had been my Josh messing around, I might have killed him myself!

Several, actually. I don't know if this rates as one of the scariest, but it's one that left me totally bereft and when I crawled back into bed and Dear Hubby pulled me close to comfort me, the first thing I said was, "I'm an orphan now!" It was a little after 4 am and my brother had called to let me know Dad had just died. Dear Hubby, bless his heart, said, "No, you're not. You have me." No wonder I love the man.

We would like to do an interview with you about your blog for
www.BlogInterviewer.com . We'd like to give you the opportunity to
give us some insight on the "person behind the blog."

It would just take a few minutes of your time. The interview form can
be submitted online at http://bloginterviewer.com/submit-an-interview

I had just gotten home from teaching school and I had two messages on my answering machine: 1) my brother-in-law telling me my husband had a ski accident and they were going to take him into the hospital. 2) same brother-in-law telling me they were at the ER and I should get there as soon as possible! I raced to the hospital as quickly as possible--My husband of four months had hit a tree, cracked his kidney and a couple ribs and was bleeding internally. After 5 days in the hospital, he healed enough to go home and then lie in bed for another few days.

love those great phone calls...they are so scary and you can't do anything about it...just pray and pray

The call from my mother telling me that my sister had been killed in a plane crash. It was a shock and an event that changed our lives forever.

My husband got the call. It was from me. He was in Kansas and I was in Oklahoma. A tornado was heading for our house in Oklahoma and I had taken cover in the bathroom with the two dogs and the cat. I called my husband and awakened him from a deep sleep to tell him the tornado was headed for me. Now, what's a guy supposed to do? It wasn't like he could rescue me though I believe I had visions of him jumping in his pickup truck and heading into the storm to save us. While I cried and he listened the tornado passed over us without touching down but it left a huge wake of distruction in its path.

Anything to shock Oma.

It turns out that it wasn't a murder after all. A year later I testified in court at what I saw. The defense said the killing was excused out of self defense. The deceased was an ex-boyfriend who was harrassing the former lover and was trying to break in to their home. The man wielding the baseball bat was defending his family and home. That night I saw him as the villian, but my view of the situation was partially correct.

I was cross-examined pretty hard by the defense, which is something I would not like to happen again.