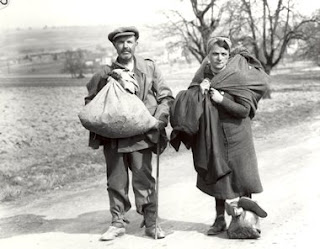 Dee brought home a few of his friends a while ago.
He got acquainted with Mariana and Augustin in the archives
and he knew I'd like them.
Augustin was a 45-year-old widower in a tiny Polish village, and he fell in love with his 21-year-old niece. The scandal forced them to run away to the big city, Vienna, where they married and had a baby girl. Mariana was a seamstress who made clothes for the Empress, and Augustin listened to revolutionaries like Trotsky and Karl Marx debate politics in the cafes.

Dee filled in the dates and facts of their circumstances--how the murder of the archduke and his beautiful pregnant wife plunged the country into World War I; how Mariana coped with the death of her tiny daughter; and how they rented their bed to a factory worker during the day just to make ends meet. Augustin was 70 years old when a son was finally born. 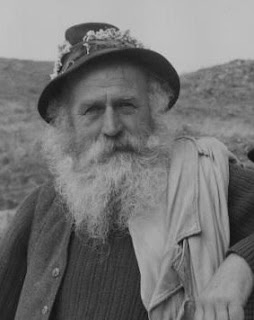 Alfred came from a little town near Prague. He and his new bride left the homeland to find their fortune in Vienna about the same time as Mariana and Augustin. They moved into a tiny apartment with just two rooms and a kitchen; nevermind that the water pump and the toilets were shared by all the neighbors on their floor! This is where they eventually raised 13 children, including a lovely daughter.

The two families were brought together when they both joined the LDS church in 1922. The son married the daughter and the couple started their own family. Hitler was just rising to power and the church members were under constant surveillance by the Gestapo, with raids, arrests and searches. The Anschluß of World War II brought the Nazis into Austria. After devastating bombing and terrifying nights in bomb-shelters, years of rationing and starvation, the Austrians were hopeful when the Soviet army came to their rescue. Wrong. By comparison, the Nazis weren't that bad. The Russians stayed until 1955.

Dee reminded me that Vienna was partitioned like Berlin was, with a Russian zone, soldiers, and severe conditions. Through it all, our friends loved their children, kept their little branch growing, took care of grieving families, sent sons off to battle, and embraced returning prisoners of war.

Vienna was the place for spies in those days. The Cold War was underway, and all the players were part of the occupying force. Dee explained how the Black Market worked and I began to understand the new hardships the Austrians faced after the official war was over. The stories were fascinating. 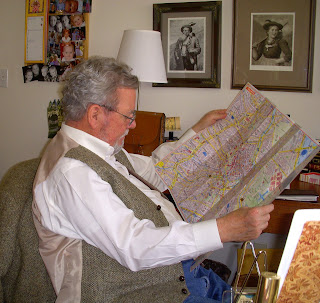 We looked at maps, and documents, books and articles, and then Dee left me on my own to get better acquainted with our friends. I've spent several hours every day for the past two months filling in the blanks. Dee had written the history and I had the task of bringing it to life. 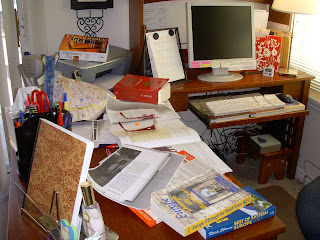 I sent Augustin, Alfred and Mariana on their way tonight, with a click of the Send key. I know them so well now, and I feel protective and motherly towards them, although they were all dead before I was even born. History is a form of time-travel, and I have friends in faraway places.

Luckily Dee has a new friend he's dying for me to meet. She's coming tomorrow! 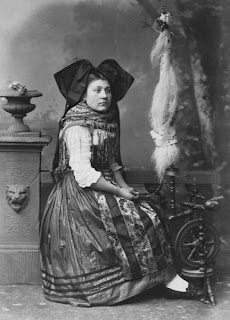 Alsatian Woman
P.S. Forty years ago today I fell in love with my history teacher.
Posted by Travelin'Oma at 2:41 AM

How on earth do you uncover such awesome stories? Way to go on yet another successful project!

Wonderful story. I know what you mean about making friends with these people. Isn't that why we do our work? To love those who are deceased!