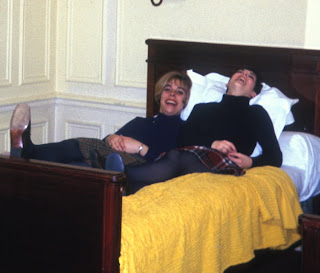 OK, so it wasn't the Hilton. But it was Paris.

Forty years ago today this was where I stayed. It was my first night in Europe, and I was a little freaked out. Built in 1900 as a train station, the hotel was huge: it took ten minutes to walk from our room to the lobby. Automatic light switches left the long halls dark just seconds after I turned a corner, and the interior decorating came out of The Third Man. The bed creaked and featured a chaise lounge type mattress, with three sections. Scared of bedbugs and spiders (I didn't actually see any) I was afraid to stretch my legs down too far under the covers, and I slept off my jet-lag in the fetal position. Years later we visited the hotel, which is now the Musee d'Orsay. It's better as an art museum. 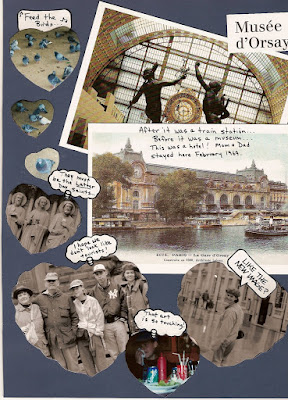 Europe with the Kids '94 Scrapbook
The Hotel du Palais really did have bugs. Situated on the River Seine overlooking the bookstalls, it seemed like a fantastic deal. I had written ahead and reserved a room with private bath to accommodate four kids and two adults for $104 per night--total! (This was 1994. I checked tonight and it's now $34 a person to stay there.)

We hauled our suitcases up six flights to a large room furnished with two double beds and two singles. The bathroom was enormous; two sinks, a shower and a separate tub, plus a long counter. Such space is unheard of in a Paris budget hotel. Dee put a backpack and his coat in the giant walk-in closet and we left our bags to go out and explore the sights.

That night Marta climbed into her bed and noticed tiny little black specks on her sheet. After a minute she realized they were moving! Hundreds of minuscule ants lived in her bed! After a thorough search we were sure they were confined to that little nook, so Marta climbed in with her sisters and the lights went out. Within a minute our imaginations had the rest of us twitching and itching.

The lights went back on and I went into the closet to find the Uno cards to relax with. WHEW!! IT REEKED! Something had to be dead in there! I slammed the door and Pete opened the window to get rid of the stench. We sat staring at each other in horror. This was not the kind of hotel with 24-hour service and a concierge. We phoned downstairs and woke the desk-clerk, (who didn't speak a word of English) to get advice. He yelled a little and hung up. The situation boiled down to this: If we left, we'd have to pack everything and walk down to a deserted Paris street in the middle of the night, in the rain, with no place else to go. Or we could buck up. Dee suggested we just make the best of it, and promptly went to sleep. (I might mention here that Dee doesn't have a sense of smell. Not only did he miss out on the closet odor of death, he carried it around with him on his jacket for the rest of the trip.)

Heidi and Amy dealt the Uno cards and the game started. Rain splashed on the windowsill and mysterious cigarette smoke wafted into the room. Suddenly there were voices right outside our open 6th floor window! Three men in a little swinging box peered inside, shined bright spotlights in our eyes, and spoke to us in French! We were horrified! I called downstairs again and the sleepy clerk explained the situation loudly in his mother-tongue. I hung up. In a few minutes our visitors floated away, and we sat spooked, with our shoes on, pretending we were camping in the woods (with ants, dead animals, and drunks) until the sun came up.

Later we learned from the English-speaking day clerk that our building had been chosen for it's regular twenty-year inspection. The workmen do it at night so the ladders and equipment don't clog the narrow sidewalks below in the bustle of daylight. He assured us the situation would only last a few more nights. Our reply: "Le train part 'a quelle heure?" (When does the train leave?)

Paris is one of our favorite cities so we didn't give up just because of a few unnerving experiences. We've stayed in some of the ritziest hotels, some cheaper but still charming hotels, and some appalling hotels. I'll skip the appalling ones, but I've suggested some memorable places here. (The prices vary with the seasons, and go up every year. I'm giving the price each of their websites listed tonight, Feb 1, 2009.) The starred hotels are our favorites, where we stay time after time and are never disappointed. 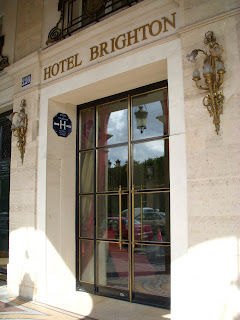 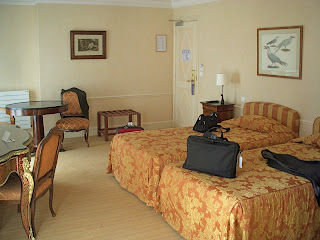 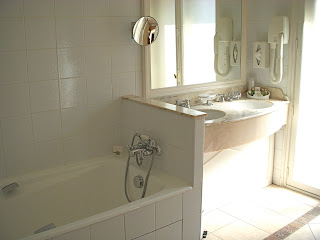 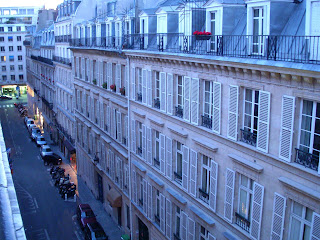 View out the side window of Brighton Hotel at dawn. 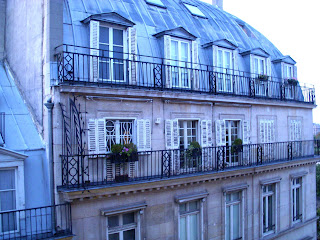 Our room from the outside.

"All journeys have secret destinations of which the traveller is unaware."
---Martin Buber

Whether you're going back to school, emptying your nest, or heading off on vacation to the Paris, Hilton, expect some dark paths, stinky nights and even a few pests. When a spotlight illuminates your circumstances view it from a different perspective. Look for the gleam of experience and the dawn of opportunity. After all, isn't that why you're on this trip?

Think about some destinations in life that you've arrived at unexpectedly.
What did you learn?
Posted by Travelin'Oma at 11:54 PM

I've learned to expect the unexpected--then learn to love it.

The Brighton looks amazingly comfortable for the price.

These travelogues and all the travel info are great, though I probably won't get back to Europe again, but then again, who knows?!

Gosh that is so fun to see us back there in Paris!! That is my only trip to Paris... I need to go again! soon!!! You always write such great stories and give such great advice! If you check out my blog today you will find that I nominated you for a creative blogger award. I hope you won't mind! (too late if you do)

I was surprised when I learned I was pregnant with my fourth child. We had decided that three was good for us. But now I've learned that having four kids is more fun than having three. Plus I always like even numbers.