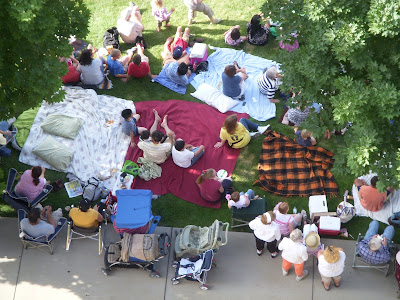 Looking straight down from our balcony
I looked out my window, and what did I see?
People sleeping underneath my tree! 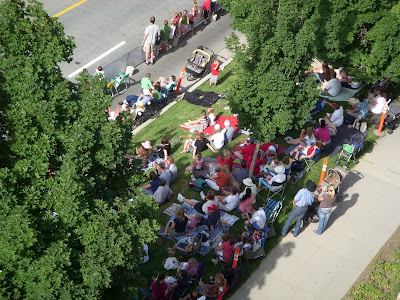 Thousands of people camp overnight on our sidewalk to reserve their parade spot.

For 24 hours every 24th of July we have the hottest real estate in Utah. Our balcony overlooks the traditional Pioneer Parade (the 3rd largest parade in the USA) and our local grands sit in our grandstand.
The 24th of July is a day of stories. Everyone in Mormondom has heard heart-wrenching accounts about the pioneers who left Nauvoo and trekked across the plains in covered wagons. There are soul-stirring tales about people who joined the Church of Jesus Christ of Latter-day Saints in England, Scandinavia and Europe. Families sold everything to afford passage, and sailed to America to join the Saints. Because they couldn't afford wagons, they pulled handcarts and walked the whole way. Miracles abound in these oft-told stories, but sometimes they lose their significance in the repetition. 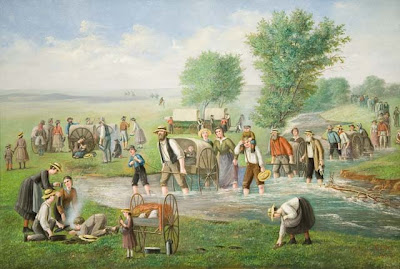 C.C.A. Christensen
A few years ago I wrote a book called A Lasting Legacy, tracing my family history back to 1628. I loved reading and working from original documents and journals. One of my ancestors was Andrew Jackson Allen, born September 5, 1818 in Pulasky County, Kentucky. He started keeping a daily journal when he was 38 years old.

One of the original pioneers, he arrived in the Great Salt Lake Valley November 25, 1847, just four months after Brigham Young told the first company, "This is the right place." The Allen family built a log cabin and lived through the winter, eating mostly flour and bulbs.

In 1848, long before anyone was telling this story in Sunday School, he wrote down his own experience with the Miracle of the Seagulls:

May 7, 1848
Now every man went in for farming. There were a field laid out large enough for all. We put in our spring wheat, corn and what few potatoes we had. We had to irrigate, which we had never done before. Now we needed to grow grain, or suffer, as there were no grain nearer than one thousand miles away and my provisions were getting short. When wild vegetation sprang up, the people had to go to the prairies to seek roots to eat, such as field onions and thistle roots which were not pleasant, but hunger made them taste good. There were some folks to my knowledge that ate large white wolves.

Now we commenced making water ditches for irrigation. The spring grain sprung up and looked quite good. The next thing we see was thousands of young crickets making their appearance in every direction. We discovered they were eating at the young growing wheat and gardens. We began to destroy them in every way we could, but all in vain. It really seemed as though the more we killed, the more came. It seemed as though they would destroy all we put in the ground in spite of all we could do.

May 20, 1848
There was a cold snap that froze the vines, and things in the ground were easily killed. Now the fall wheat we had got was just beginning to put the head out of the ground and the frost killed it. This was a trying time. Those crickets also were eating at the fall wheat. Many of us were out of bread. Just now the seagulls came in flocks by the thousands and began to eat the crickets. They would cover the fields and fill themselves and then they would fly to the water and drink, then they would vomit them up and go again and fill up again. They seemed to repeat this time after time after time, and soon they destroyed the crickets in a great measure. We attributed this to the hand of the Lord in our behalf. If those gulls had not destroyed them, they would have destroyed all of our growing crops. And that would have brought great suffering among the people.

This guy was pretty great: my great-great-great-great grandfather. He touched on a huge variety of events: the death of Joseph Smith, the civil war, the assassination of Abraham Lincoln, the "tellegraft wire," the coming of the railroad, and the shot that killed President James A. Garfield.

He wrote "one of my little boys, 19 months of age, had been sick but got better. Was taken worse and at 8:00 am he departed this life." And a couple of years later: "My daughter, Purlina, were taken very ill with her old leg complaint. I done all for her I could, but all in vain. She departed this life at 7:00 pm, perfectly in her right mind, reconciled to her fate. Her age was 12 years and 11 months."

Andrew Jackson Allen died at age 66. The obituary said, "He was gored to death by a vicious bull." It's a horrible end, but it makes a great story.

The Bible tells us that our hearts will turn to our fathers. I believe it. Joseph Fielding Smith said, "It remains the responsibility of each individual to know his kindred dead . . . it is each person's responsibility to study and become acquainted with his ancestors." Compiling dates isn't enough. We are, after all, not simply clerks recording their passing. We're a family, all marching in the same parade.

I love the term Family History rather than genealogy. We are family, and have a feeling of family as we learn about our ancestors. It's exciting when a name comes to life as a personality.

This is one of the fun things about living where we do. We will also have local grands in our personal grandstand today to watch the parade.