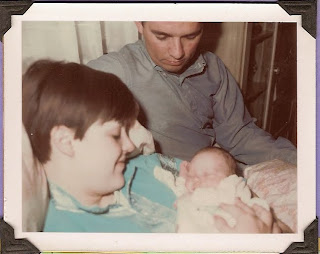 My biggest fear as a little girl was that I'd die before I had kids—I could hardly wait to be a mom. My dream came true July 11, 1970.
Gabi was whisked away to an incubator right after she was born (breach) and I didn't get to see her until she was four hours old. When the nurses wheeled six infants into the hospital ward (babies stayed in the nursery in those days) mine was the only one crying. The other five mothers were skilled at cuddling and nursing, and I imagined their criticism as I tried to quiet my newborn's wails. It was stressful, feeding did not go well, and I was exhausted and relieved when they took her away.

Nowadays new moms jump out of bed and go home hours after delivery, but forty-one years ago we were wimps. We stayed in the hospital three or four days, and a nurse had to walk us to the bathroom or the sitzbath down the hall. Every four hours they brought my hysterical child; I began to dread it. Motherhood was much harder than I'd imagined. Then we had to go home.

On my own, I panicked. I wondered why anyone thought I could be left alone with a baby—I didn't know what to do! Wasn't inexperience a form of child abuse? Gabi cried all the time and so did I. When she was a week old I realized I'd never even said a prayer to be thankful for her, and (I'll admit it now) I wasn't sure I was. The whole thing was so overwhelming, so demanding and so constant.

When I told this story to a friend years later, she asked, "How old were you?" "Twenty," I said. "No wonder," she said. "I felt the same way and I was almost thirty." She went on, "I should have waited a few more years. I just wasn't ready."

I'm so glad I didn't wait until I was ready. How would I get ready anyway? It would be like taking swimming lessons without any water: treading water was just a concept until the day I was in the pool and couldn't touch the bottom. Panic was my first reaction, and I floundered and went under. But then I came back up and discovered I could stay afloat. I learned to relax, and little by little the constant movement of my arms and legs felt natural and routine. That's how motherhood happened for me, too. I needed to be in the experience. 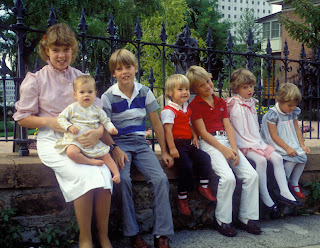 Our family, July 1982
Even as it was happening, I could see that Gabi was teaching me how to be a mother. Now, in retrospect, I am convinced that's the way it was meant to happen. If I'd waited until I was ready, I'd still be waiting. Happily, it didn't occur to me to wait for anybody, in fact I could hardly wait for them to arrive. They were already my life's work.

I chose motherhood as my career. It was never something I fit in around the edges of my life—it was my life. Like with any career, my early days on the job were daunting, and I wondered if I could really do it. Like with any career, there were times when I felt overworked and undervalued. I got tired of the uniform, the cafeteria and the people I worked with. Who doesn't? But thirty years later I retired with competence, experience and full benefits. 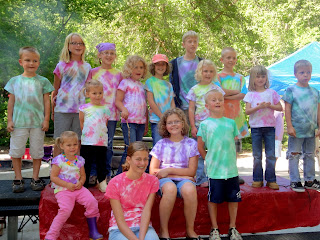 Fifteen of our twenty grands, July 2011
This summer has been full of benefits—we've had fun times with all our kids and grandkids, and appreciated them more than ever. This is what I believe—I believe I knew this group in heaven before I was born and had to leave them behind when I came to earth. The yearning I felt to be a mom was because I missed being with them, so I was compelled to get them all here as fast as I could. In that respect, I was totally ready.

I'm offering a prayer of thanksgiving now. I thankful to be a mother.

I love this. I couldn't wait to have children, but the opportunity didn't come until I was barely 30. Now, I am certainly learning to be a mom - and loving it, even though it's different than I imagined it would be, and even through difficult times. Motherhood is teaching me more about myself than I thought was possible, and I feel humbled everyday to do this work.

Thank you for reminding me to always keep gratitude for this momentous blessing in my life. (During the flu, it's definitely a fantastic reminder!) Oma, you are great. I love reading your blog (& Marta's, too - you are both such positive people, and I appreciate that more than you know).

I seriously loved this post. I've re-read it now a few times and I'm totally tearing up at the part where you said you missed them so much, that you yearned to be a mother and get them here. I totally feel the same about my little crew. Thanks so much for this post. Touched my heart.

Great post. I think that if women waited to have kids when they were "ready", they'd never be ready. I agree that being a mother is a learning process. You grow with your kids. Motherhood is something that you just have to jump in and do.

BTW - I loved your comment yesterday in RS about the move to England.

loved this post, mom. you always inspire me. am so happy you chose us as your full-time career.