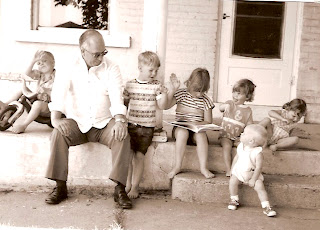 The first thing I ever sacrificed was butter. Then it was milk. We were newly married students, playing house and expecting a baby, and as poor as could be. I had been raised in a family where we took our butter seriously. Dee thought we could substitute a very yellow cube of what tasted like hard crisco. When that didn't help our savings plan, he suggested mixing our skim milk with powdered milk. I was pregnant and couldn't stand the smell, so he would mix it up every day himself. If I drank it very cold and very fast, I almost didn't taste the powdery yellow lumps that floated on top. Mixing it with cheap powdered whipped topping was a lumpy, tasteless mess, that brought on morning sickness at any time of day.

One morning very early I heard something at our door. I opened it and found a package with a pound of real butter and a 1/2 gal of real milk. Soon these packages were being dropped off regularly, sometimes with a pint of whipping cream. I caught my benefactor one day at 5:am. It was my father-in-law! He knew Dee could live the impoverished life but he didn't want me to. It was such a sweet gift. He kept me in fresh dairy goods for a few years. I've never forgotten it.

I had been married about 10 years before I figured out what to call him. It eventually turned into Grampa. I hugged him for the first time after our 4th baby was born. I had to work up my courage because he'd never shown affection to me before. I finally said, "Prepare yourself to be hugged!" and then I hugged him and kissed him on the cheek. He reacted like a 10-year-old boy. I was still pretty young, and pretty pretty, and he blushed and grinned and guffawed a little but I could tell he was pleased. He never initiated it, but I felt comfortable after that. He showed his affection for all of us through the grandkids.

Dee's mom had MS and was in a rest home the first 10 years of our marriage. Grampa took over the hospitality duties at home. He had us over for dinner many times. He liked to make jello with the plain and frothy layer effect. He made lamb stew, or beef stew, or soup. He wasn't supposed to eat salt so when he made ham he would boil it until the salt was gone. There's not much flavor at that point, so I'd have to go heavy on the mustard. He hosted Thanksgiving several times, and made all the fixings, then served them in mismatched Tupperware. It was a man's meal, full of love and thoughtfulness. It was so cute that he invited us with all 7 of our kidlets to invade his little house, but he wanted us to feel welcome.

Grampa inherited an old pioneer house when his own dad died. He decided to fix it up. He dug up the floor and replaced the floor boards, walls, added a bathroom and restored the outside of the house and yard. He built a brand new kitchen with new cabinets, and installed up to date windows. He worked on the house for a couple of years whenever he had a day off. He called it "Grampa's Play House." We'd visit him over there and pick the walnuts off the lawn so he could show the kids how to crack them.

He had his own timetable. I'd invite him up for Sunday dinner and plan it for 1:00. He'd show up at 10:am while I was still bustling around in my nightgown, with the kitchen a disaster, and sit down on the floor to play trains with the kids. About 1:pm he'd announce he was leaving! I'd say, "Oh, but you haven't eaten...." and he'd say, "It's fine. I'll stop at Chuck-a-Rama on my way home."

Grampa was so proud of his grandkids. He kept track of their games, recitals and interests, and would often share little treasures with them: coins, stamps, acorns, polished rocks, and spent shell casings. He sat with them on the floor and played Hook and Ladders, Uno, and blocks, and when he was at our house there was no mistaking who he was there to see.

Grampa made his own jam. He invented many different combinations such as cantaloupe/walnut, and apricot/peach/pineapple. He carried several jars proudly into restaurants, turned down the jam offered, and opened his own jar. He always had extra jars and offered them to his waitress and the people sitting nearby. He loved sharing his wares.

Grampa was funny with cameras, too. He had a camera Dee had bought him in Germany which was his prize possession. He was continually trying to improve his photographic skills over the many trips he took. Once he came home with a roll of film that he had used over and over. He had forgotten to wind, so the pictures were all on top of each other! He took masterpieces of the entire trip to Hawaii, but without film! The topper was when he perfected his methods, and took beautiful shots of his cruise to Alaska. He dropped the camera into the ocean on the last day of the trip.

Grampa would be 83 today. He was a hard worker, dedicated to providing a living and a home for his family. He was a quiet, even shy man, but very sociable in the right circumstances and had a lot of friends. Education was important to him because he didn't go beyond high school. He was patiotic, and served in England and France in WWII as a very young man. He had a well-kept home and lovely yard, cared about his flowers, staining the fence and painting the house regularly. He married for a second time after Afton died, but as he lay dying his second wife kept whispering "Go to her, go to sweet Afton, she's been waiting..." and he did.

Happy Birthday, Grampa. We're remembering the little things you did that made a big difference!
Posted by Travelin'Oma at 11:11 PM

Everyone should be blessed with such a "Grampa". Something tells me my own Dear Hubby will be remembered similarly in future years. What a beautiful birthday tribute!

A lovely tribute; one that had me remembering my grandpas and smiling, until the last line and then tears welled up in my eyes. The 2nd wife must have been a real winner to say that. God bless her!

What a beautiful person your father-in-law was. This was such a touching tribute to him and made me think of my grandfathers, who were very different from one another; but pretty great guys themselves. How lucky your family was to have Grampa and their memories about him.

Mom,I'm so glad you wrote this about Grandpa! I recognize a lot of the same characteristics in our Opa. Sweet men.

I, too, see a lot of him in Opa. In fact, whenever you or Dee do thoughtful things for us or our kids (which is a lot), I will remark to Josh, "See, this is a butter thing." I've always loved the butter story. What a great picture, too. Love to get a copy of it and more like it.

thanks for keeping these memories alive. i love reading your blog and remembering the old days. i've never had jam quite like his!