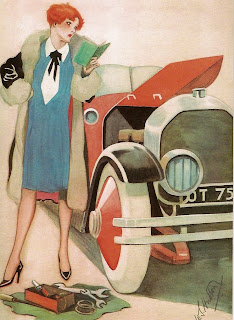 Art by W. S. Hutton
There was a big jolt, and then it got bumpy. I sensed it coming, but I was going too fast and it seemed impossible to slow down. As the air escaped from my tires, I veered out of control. Everything went flat. I was having a breakdown.

It all started in June, 1981. We were excited, expecting our 7th baby, but we didn't know where we'd put her. Our house was overflowing with kids and shoes and outgrown coats: we decided to remodel the basement. The contractor said it would take two months. Perfect. The kids could all live in the family room while the bedrooms were reconfigured into two big dorms.

Four months later Marta was born. The painter was the one who took the call announcing her birth. Workmen had taken up permanent residence in our home—it was a nightmare. One thing had led to another and construction was taking place all over the house. What were we thinking?

One day, when the baby was less than a week old, I put her in an infant seat on the dining-room table, out of danger. Her sneezing siblings were smearing chocolate on the drapes while I talked to the pediatrician on the phone. A lamp tipped over just as the doorbell rang. "We're here to see the baby" called my friend, herding her three kids around ladders and through stacks of lumber.

In the garage a saw whined. The carpenter had just removed some wooden slats that held the cathedral windows in place when suddenly a gust of wind blew the plate glass in. It shattered all over the room. 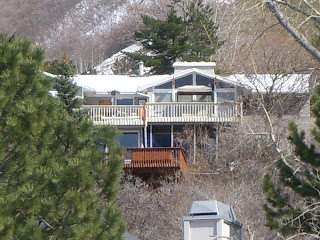 Our house back then.
Marta and the other kids were protected from the tiny shards, but I was hit—not by glass, but by the enormity of my situation. These kids were out of control. I had way too many of them, and they were all living in the family room out of boxes, and there were strange men using my bathroom, watching me and my house fall apart. 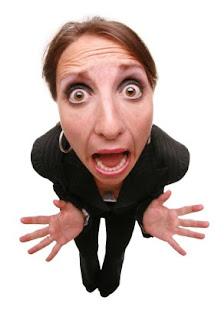 What put you over the edge?

Man, oh man. I can't believe you're still here to tell about it. I think I might have run away and never returned.

Now that's a true Calgon moment! Maybe not to the same extreme, but most moms get to the point where they are at there limit. For me, it was breaking down in tears trying to console an inconsolable twin, and walking into the other room seeing my ten year old daughter doing the same with the other inconsolable twin.

What makes a mom, is that we don't run away. We hang in there and keep trying even when we feel like we have nothing left to give.

I'm pretty sure I had a panic attack just READING about your experience... how you lived through it all leaves me in awe and wonder. Can't wait to hear how you all survived! :)

oh goodness - i can feel my stress level rising just reading that. but i can also imagine it being one of those memories you look back on and just laugh. hopefully :)

glad you and i both survived. good thing you saved the best for last. xo.

Wow, despite different circumstances we've all been there. You have my deepest empathy. Can't wait to hear the next chapter!

Wait! What happened next?

Even though I know the story, I want you to keep going! Don't keep us in suspense too long.

do you really want me to go there? i'd have to take over your blog!!!