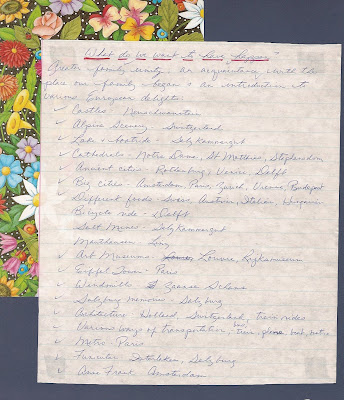 Rick Steves, the Fodors, Arthur Frommer and Steve Birnbaum: these travel writers were the special guests at our trip planning Family Night. Dee and I and the four kids each had a different book on Europe, with the assignment to speed read for fifteen minutes and come up with personal answers to the question: What do you want to have happen on our trip to Europe? When the timer went off, the responses were written down.

Our overall goals were defined as: Develop greater Family Unity. Get acquainted with where our family began. Have an introduction to various European delights.

Each person had some specific requests:

The next activity was for each of us to look in the index of our book and find spots that met these descriptions. In another fifteen minutes we had a list of places from Spain to Norway. The final exercise was to pinpoint the locations on a map of Europe, and see how they could be connected logically.

Art museums were plentiful; the Eiffel Tower was in Paris. Unique architecture was everywhere; the Anne Frank House was in Amsterdam. Those two cities met other criteria, too: the Metro, windmills, fabulous art museums, unique architecture and a famous cathedral. Both of them were big, cosmopolitan cities, and because they were only a few hours apart, yet vastly different in character, they were agreed upon quickly as musts.

At the next planning session, we followed the same procedure, and narrowed our other choices down to London, Switzerland, Germany, Austria, Italy and Hungary. Our transportation needs, plus one of the goals, could be met if we traveled by train. A little research showed that Eurail passes were the best option, but they didn't cover tickets in England, Hungary, or parts of Switzerland.

Looking at a calendar, we counted our days and estimated the time we wanted to spend in our selected countries. Our itinerary was impossible to do in three weeks. When we started to cut it down, the places that would cost extra got eliminated first: London, Budapest, and Switzerland. Wait...we really wanted to go to Switzerland! It was decided that it was too important to cut, and worth the extra fare, so we added it back in.

The trip was starting to fall into place. When we checked airfares we found Amsterdam to be the cheapest place to fly in and out of. Perfect! But it would take a couple of precious days to get back to Holland at the end of the trip. If we flew home from Munich the cost would be a little more, but we wouldn't have to backtrack. We made that adjustment. Now we had a flight plan to work around.

It was exciting to mark up our maps and discover the routes that would work. (In the end we had extended ourselves too far. While we were traveling we decided to save Italy for another time, and enjoy the ideal weather and cheap hotel we discovered during an unplanned train stop in Feldkirch, Austria. More on flexibility in another post.)

Van Gogh and Anne Frank were topics at the dinner table. Memorizing foreign phrases became a contest. Knowing where we were going, and why, and who it was important to, made saving our money easier. As we had to make decisions of places to add or subtract we became more cooperative. The whole process nourished our enthusiasm.

What we wanted to have happen was already happening!

I love these posts! I need to print them out and put them in my dreaming file. Planning trips is half the fun!

I cannot wait until my kids are old enough to help with the planning process and voice opinions. We travel so much, sometimes the planning is overwhelming.

This is so wonderful!!!! You really came together beautifully!!!!!!!!!