Choose a direction for life 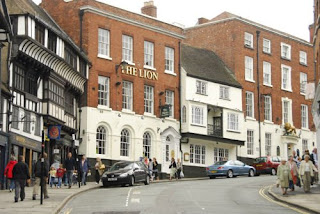 We crossed the bridge and entered a warren of twisty roads, following a sign that pointed to the Centre. I glanced down at my notebook, and when I looked up I shouted, "There it is! Turn! Turn!" Dee was negotiating the right hand steering wheel, shifting with his left hand, but he still made the pivot into rush-hour traffic. I jumped out near The Lion Hotel to check our accommodations while Dee drove up the street to find parking. That's when he disappeared. 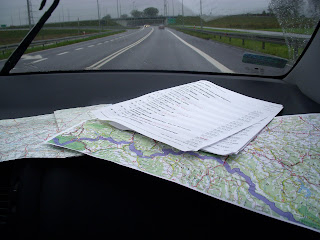 On the road with Oma and Opa.

After a sleepless overnight flight to London, we had decided to drive north to the Shropshire area where our research would start. We were unfamiliar with the drive, but we estimated it would take us about ninety minutes. Unfortunately, our navigator (me) had us exit the freeway too soon, and after a three hour detour on misty country roads, starving and with extremely frazzled nerves, we had reached the medieval town of Shrewsbury.

The list of hotels on the Internet was short, so had I assumed we were staying at one of the only hotels in the middle of a small village. But dozens of hotels and B and B's lined the maze of tangled streets that went off a ring road surrounding the city. Most of the streets were narrow with one-way traffic and I kept my eyes peeled for The Lion as Dee concentrated on avoiding cars, bicycles and pedestrians. I dashed across the street in the rain, while our car disappeared in the drizzle.

After I checked in, I wandered around the small lobby waiting for Dee. He didn't come. A driveway next to the hotel led to what I thought was a parking lot. But it turned out to be too narrow for a car, instead lined with trees and shrubs and garbage cans. Further exploration took me to an alley behind the hotel that connected the back entries of other shops and restaurants. When I came back in, the lady at the desk seemed puzzled when I asked if she'd noticed my husband. She said she'd thought I was alone.

Forty minutes passed, and then an hour. I was so hungry and worried, and exhausted that I could hardly think. Where could he have gone? Had he been in an accident? How would anyone know where to find me and tell me? Nobody in the world knew exactly where we were! What if he'd been kidnapped? Panic turned to near hysteria. I ran into the lobby bathroom and threw up. Again I asked at the desk and then went upstairs to see if he'd somehow found our room. Back in the lobby I paced for another thirty minutes, close to tears, my imagination taking me to horrible places.

And then Dee came through the door. Flooded with relief, I unaccountably yelled at him, "Where have you been?" He answered with equal exasperation, "I've been lost!"

As it turned out, there was not a place to park nearby, and the road continued through the center of town, with a labyrinth of confusing paths, taking him back to the ring road. Dee didn't have an address for the hotel or even a name; I had all the information with me. He couldn't remember where I had gotten out of the car, and he didn't recognize any street-signs or landmarks. How could he find his way? He didn't know where he was going! 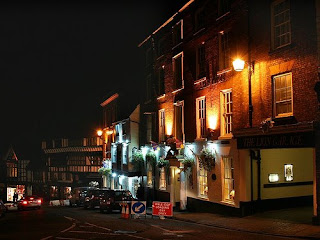 I think lots of people are lost because they don't know where they're going. Life can be like Shrewsbury seemed to Dee: a maze of confusion, dead-ends and unfamiliar paths. Folks are weary, just searching for a direction.

After a lot of wrong turns, Dee finally felt a spark of inspiration. The answer to my frantic prayers came when he recognized the little driveway. It didn't go where either of us thought it would, but it brought him back to me.

I am so blessed to have direction in my life, and a destination I'm sure of. And I don't want anyone I love to get lost!
Posted by Travelin'Oma at 11:40 PM

Enjoyed your lovely story. And I appreciate the deeper meaning. Ellouise

Amen. Bill and I also got lost in Shrewsbury in 1998. It's a very confusing town, crazy one-way streets (much like life to many). However, we were together, so it wasn't quite as frustrating as your experience. (I have family from Shropshire.)

Great story!!! Someone wiser than I said, "If you don't know where you're going, any road will take you there."

My take is choosing the right road is the key. It seems that I always choose the one with the biggest potholes. I gotta get better at those choices.