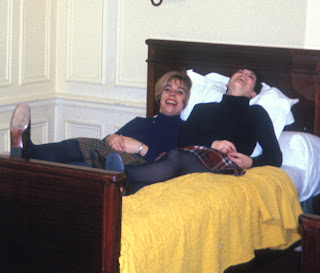 Sher (left) and Me (right)
Thirty nine years ago today.

"The trip and the story of the trip are always two different things." (Lorrie Moore)

Salt Lake City to Paris, France is a long way for a 19-year-old girl. The plane stopped in Boston and again in Gander, Newfoundland to refuel so I was pretty giddy by the time we landed twenty hours later. Our hotel was an enormous old railway station, (which was later closed and reopened as the Musée d'Orsay.) It took us ten minutes to walk from the lobby to our room!

Even though we were exhausted we took a bus tour to see the highlights of the city. I was overwhelmed and underwhelmed. I was expecting a Disneyland type atmosphere in Europe; Paris was crowded with grimy, narrow streets and buildings all crammed together. I'd only been to cities in the western USA, places where everything is spread out, you can see for miles, and the sky is big. Nothing had prepared me for the claustrophobic feeling of being unknown and unnoticed in a vast city with millions of people.

I ordered an omelet in a cafe because it was the only dish I recognized. The waiter didn't speak English, and we didn't know how to get our bill. When it came, even the numbers were written differently, so I just let the aloof cashier take the unfamiliar coins out of my hand.

Everything smelled funny. Salt Lake City wasn't settled until 1847, so I'd never been inside an authentic antiquated structure of any kind. The ancient, musty Parisian buildings and exotic, unusual aroma of French food gave off a unique scent, inside and outside.

I was used to cold, crisp mountain air, with bright blue sunny skies, even in the winter. Paris was cold and damp and gray and oppressive. I was let down.

Our room was large with a big old bathroom. I didn't realize at the time how deluxe it was for students on a budget. But it wasn't at all like the Travelodge motels I'd stayed in before, and I found that disconcerting. The tub had separate hot and cold water taps, and I couldn't figure out how to wash my hair. The furniture didn't match. There was just one dim light bulb in the fixture that hung from the extremely high ceiling. I wasn't sophisticated enough to realize the moldings and furnishings were ornate and classic. They just seemed old-fashioned to me.

Excitement carried me through the first day's activities, but I was close to collapsing after dinner. My bed was very soft and uncomfortable. I was scared to stretch my feet down to the bottom, under the covers, for fear I'd touch something strange. I don't know why, because the hotel was very clean. It was all just so foreign. After falling asleep about 9:pm I woke up at 6:am, and it was still dark outside. Breakfast wasn't until 7:00, but by then I had fallen back asleep, and jet-lag kicked in. I didn't wake up again 4:30pm and it was already dark again!

By the time I was up and dressed I was starving. This time I had a crepe from a sidewalk stand. The streets were busy with pedestrians going to cafes and jostling for buses and taxis. For a girl from the suburbs, it was fascinating to see so much activity, and frightening to be unable to understand anyone. Young men in groups flirted and teased, and then laughed as they walked past, and I had butterflies in my stomach, wondering what they were saying.

I had planned and saved for my semester abroad for three years. Culture shock was something I hadn't expected. Now that I had arrived, I was exhilarated and eager, but panicky, and fearful that I might not like it. I hadn't yet heard this excellent travel advice: Expect the unexpected, for those who travel rigidly will find much to distress them. I did.

I've been back to Paris seven times since 1969. It is one of my favorite places now; I love the smells, the crazy drivers, the bridges and churches. The sun shines in France and the sky can be blue, but even when it's raining and chilly I think the atmosphere is intoxicating. In spite of my first long day in the dark, I agree that Paris is The City of Light. 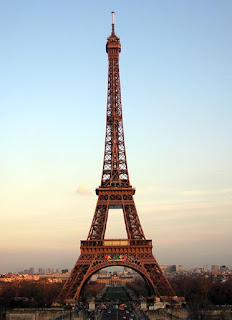 Have you ever pinned your hopes on something that didn't turn out the way you planned?
What was your experience the first time you went away from home?

Email ThisBlogThis!Share to TwitterShare to FacebookShare to Pinterest
Labels: Salzburg

I haven't really yet been anywhere cool, but I remember leaving Utah for the first time to move to MN. I expected people to think I was different because of my religion. I was shocked to find that nobody really cared. I also remember being really surprised to find people with values similar to my own that weren't of my religion. I was stupid, I know it. But it was a huge eye-opening experience for me.

I WANT TO GO TO PARIS!

I am not sure anything can truly live up to, or down to, for that matter, expectation. Somehow in the anticipation of an event or trip or anything else, we either over dread or over hype what we think our experience is going to be. It's a funny little quirk of human nature, I think.

my first trip to europe sounds kind of like yours..scary,but exciting. i found out that when travelling it is suppose to be an adventure,so if something happens that wasn't expected you just go with it....like jim's and my 12 hour train trip from london to edinburgh that was suppose to be 4 hours and no train change. we had about 5 changes..one to a bus..we had fun anyway.

I went on a study abroad to England and remember sitting in the airport with my dad and breaking into tears. I was so scared because I was going "alone" without my twin or any other member of my family. It was such a good experience for me to meet new friends and break out of my safety bubble! I was lucky to spend my first week with an English family who made me feel at home by making stir-fry and taking me to McDonald's!

Ten years ago at the age of 47, I took my first and only trip to the U.K. Most of my life, it was the only place I REALLY wanted to go. I can truthfully say I was not disappointed with one thing in the 16 days I was there. I loved every minute, every sight, even the food, which I'd been told was awful. Sometimes things DO live up to our dreams.

I would LOVE to go to Paris. My mom was born in Verdun, France because of the war. She has pictures of her at one in front of all sorts of European landmarks. To go be a part of all of the history there would just be amazing!

Unbelievable how time flies!!! We were so young then! What a fabulous experience we had. You know, I haven't been back there since... I need to go! I understand Delta is going to have a direct route there starting in June... let's go!!! (thanks for not mentioning our "theatre" outing)

my first outing on my own..was with suzy, sherrie's sister, kathy, susan and cheryl...we went to europe on a tour, which turned into an old folks tour..but, it was alot of fun...we all ran out of money a few times...learned to love the chocolate and made me want to go back...i loved it...made me love to travel...

Wow, look at you Marty. A young women in Paris...before your husband, before your beautiful kids. Doesn't it seem like those early years never were? Good thing we have pictures to remind us. You sure have had a wonderful life since.

i absolutely LOVE this picture. it is so perfect + cute!

I love this picture of you. I love it. It's beautiful.