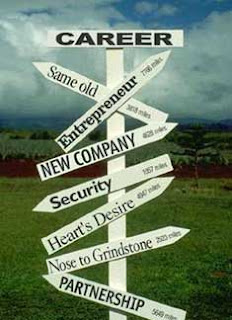 Dee quit his job on April 22, 1985, in a blaze of certainty. The next day we went into panic mode. It's funny how all our daydreams faded into doubts overnight! By May 1 he had read several books on career change, contacted executive search agencies, filled out resumes---he remembers standing on a corner in the middle of downtown wondering which building had a job for him. It's hard to choose from everything. And yet he didn't feel qualified for anything. He had offers in the real estate market that felt safe and familiar, but the point was starting over. We didn't want to compromise now that we had taken the big leap. Those famous words came back to haunt us: What do you do with a history degree??

Our savings account was diminishing more quickly than we had planned. The blue chairs in the bedroom were getting extra use. Hours were spent sitting there, facing each other, discussing, considering, comparing. We were sometimes excited, sometimes scared. We cried, prayed and wondered what we were doing. We had felt the Lord's influence in our decisions so far, but we didn't know if we were supposed to wait for guidance or move ahead on our own. Then again, maybe we had imagined all of it. Were we really inspired by God, or was there too much chlorine in our water? One moment we were full of faith, and the next we were full of fear. Total opposites.

Scriptures kept coming to mind: "Seek and ye shall find...," "Be anxiously engaged in a good cause...," "Search diligently, pray always, and be believing and all things shall work together for your good...." We trusted, but we had to remind ourselves of that fact. One of us would be up for the adventure, while the other was in the bathroom throwing up with worry. It was a roller coaster of emotions, and they changed hour to hour. We knew we were on the verge of something big, but we didn't know what it was.

Dee took a church youth group to a conference at a university. While the kids were in a workshop, he went into the career counseling office and thumbed through some books. Looking under history, he saw some graduate programs in Historic Preservation. Suddenly he was sure of something. He came home and told me he wanted to go back to school.

Visions of student housing with seven kids swirled in my mind. Been there, done that. I said I was all for it if we could do it with style; I wanted it to be an adventure for all of us. Dee began to research colleges that offered a master's degree in Historic Preservation. Most of them were back east, and very expensive, taking two years to complete. We got excited by a program in Delaware and one in Vermont. The only way we could finance it would be to sell our house. We decided to go for it, and then we prayed to know if it was right, and how to proceed.

June 16 was Father's Day. At church I told someone what our plans were, and as I said it, I started crying. I couldn't stop! The stress of the whole thing just came pouring out and I kept crying the whole day. All the pluck had gone out of me; I was exhausted and I felt like a wet noodle. I prayed for a jolt of certainty.

Our prayers were answered. Dee had been visiting everyone in the state who was connected with historic sites. On Monday he called on the state preservation officer. (A week before we had not known that office existed.) The fifteen minute appointment stretched to two hours. Dee met me at a little league game that night bubbling over with excitement about his new acquaintance. This guy had received his MA from a university in York, England. The course was designed as a mid-career program, and was only a year long, therefore much less expensive, and was regarded as the best of it's kind in the world. (In fact, the architect restoring the capitol building in Washington, DC, was a student with Dee, as well as architects and historians training for projects in Greece and Italy. Professionals were sent in preparation for unique restoration and research assignments.) Dee called the next day, and was given details for application. He was told he was very late and would need to apply in person.

This was right! We knew it! Do you remember when Indiana Jones took the leap of faith into the chasm, and the invisible path suddenly became obvious? That's how we felt. We had found our path, but we still didn't know where it was leading. 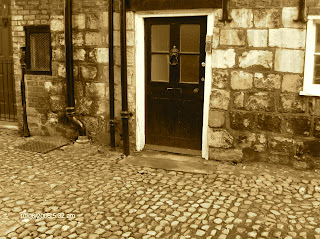 love this! it gives me hope... we are just about to take our own leap of faith. jeff quit his job on friday. cross your fingers and say a little prayer for us!

When I first started reading, I thouht you meant this happened this year.

I am really looking forward to the rest of the story!

Cliffhanger time! I'll be biting my nails until I see the "happily ever after." Wait a minute! I quit biting my nails! So what's a girl to do? Shut up and wait maybe? lol

Great installment....loved reading about your Leap of Faith...I'll be back.

Thanks for sharing more of the story with us.