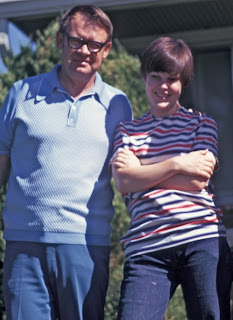 "I considered it quite a blessing that we had no money." Dad was recalling his childhood in the 1920's. "We had to scratch. I didn't even have an over coat until I was out of high school. Our family was always in deep money trouble when I was a kid, and all of us did any old thing to help make ends meet.

"I picked strawberries and cherries for 25¢ a case. One summer I picked worms. Some people had a huge dew-berry patch, and the owners came through the neighborhood in a truck to pick kids up. It was a bring your own equipment project, so I took a bucket, a pair of gloves and a hat. I picked great big green worms that were two or three inches long. After filling a bucket, I'd dump them on a fire of burning oil. Doing that all day paid two dollars." 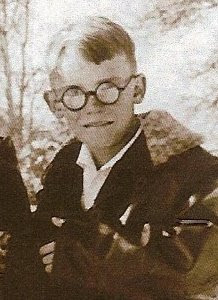 "When I was about ten, I had a make-shift incubator. I raised 200 baby chicks until they were five weeks old, and then nailed a sign on a telephone pole and sold them five for a dollar.

"A neighbor had 30 cows that I herded when I was 15. I just walked along the road slowly all day, stopped to eat, and then at 4 o'clock I'd start them back. It was extremely boring.

"Saturdays I'd try to get a 'loop' at the golf course. It took an hour to walk there, and caddying for a round of golf took four hours. It was a big deal to get a 10¢ tip. With the dime I could buy a hamburger and a coke, and still have a buck to take home."

When Dad was older he worked with his mind instead of his hands. Eventually he could afford the best of everything, and he was generous with gifts and money. But work to him was a way of life, and he never stopped.

I've never picked worms, or plucked chickens. I haven't even had a boss (or a salary) since I was twenty-one, but I know how to get a job done. I learned by example that work isn't only about earning money. It's more about confidence, growth and dignity. The reward of work is having done it.

"Look at a day when you are supremely satisfied at the end. It's not a day when you lounge around doing nothing. It's when you've had everything to do, and you've done it."
...Margaret Thatcher
Nine years ago my cute dad died. I'm remembering how he lived. I think of him every day.


What's something important you learned from your dad? Share it with us, and if you still can, tell him, too.

Great post! I miss him! I was actually just thinking about Grampa and what a kick he'd get out of this next generation. Thank you for posting photos and memories. It is a great way for me to show my kids their heritage.

Has it really been nine years? Wow. I really loved your dad, too. He used to tease me all the time about being from the "wrong side of the tracks." I loved it. What great memories and pics. Thanks for sharing.

Sounds like he was a great man and a great example. Thanks for sharing your memories!

I didnt know most of things so thanks for sharing! I miss him!

that was a great post with great stories...i miss dad too...i just always thought that he was the best dad ever..he was so generous, happy, fun to be with, he just made life exciting...i agree with gabi, he would love the babies in the family...

What a lovely memory!!!

How sweet, and you looked SO cute!

I learned from my dad that just because he was quiet and naturally reticent, it didn't mean that he wasn't smart or didn't have opinions.

What cute pictures. My dad, as you know, is a very goal oriented person. Something I really admire and try to emulate. He decides he's going to do something and then figures out how to do it where most people I think would make excuses.

Example. When he and my mom lived in L.A. there was a huge, ritzy hotel near them where people coming from out of town would ask about the temple. They could see the view of it out their windows and would ask the concierge about it and who was that gold man on top. My dad since he was the bishop at the time was asked about it. He made up a beautiful professional looking brochure about the temple and our church, including of course phone numbers for missionaries and meeting times for Sunday services and distributed them in hotel lobbies all around the area.

It is very nice to read a lot of good things about your Dad. In my case my Dad died when I was 9 years a few days before my 10th birthday. I don't hardly remember him and I do not have any memories of him the only memories I have growing up is when my classmates talk about their Dad I have nothing to say.