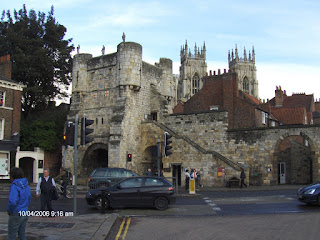 "It will be difficult to find housing for your enormous family," the letting agent said. "Would you consider living in the depths of the country? There would be no central heating, of course, and it can get bitter in the thick of the winter." 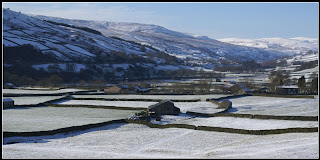 Yorkshire Dales in the thick of the winter

Dee and I were in York, England to secure a place at the uni, and a place to live. Yorkshire has a delightful and picturesque language all it's own, to match it's beautiful countryside. Although we'd been to London a few times, and visited the south coast, we had never ventured anywhere else. York is a medieval, walled city, sometimes called the Capital of the North. The center of town is pedestrian only, with quaint cobblestones and ancient buildings. It's a fairytale setting and we felt like we were in one. 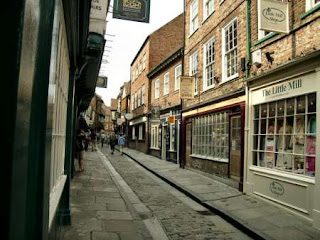 We were there for twelve days and visited several estate agents, but as soon as we said we had seven kids they declared us "impossible." One of them suggested we rent two flats next door to each other, "one for the children." We poured over the newspaper to no avail. At the chippy (fish and chips shop) we were advised to visit Nigel Naisch. "He'll have something brilliant." We only had two days left. 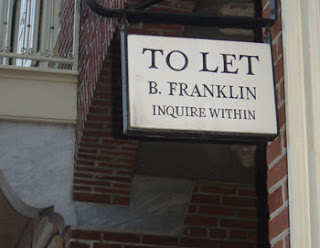 Did they leave out the "i"?

Feeling desperate and scared of his reaction to the whole truth, we told Nigel we had four children. (Well...we did have four...) He told us he was just ready to let a house to "some Saudis" for two months, but since we wanted a year, he'd rather let us have it. It turned out to be a Victorian mansion built in 1850, a ten minute walk from the center of town, and just outside the walls.

The couple who owned the house lived part-time in the main hall, and most of the time in London. They had turned the old servants quarters into a huge apartment. It was fully furnished down to the silverware and a hoover (vacuum), with an entry way like a small hotel. Actually, after you came through the front door, there was a small entryway and then a set of double doors to the main entry. From top to bottom there were six flights of stairs. 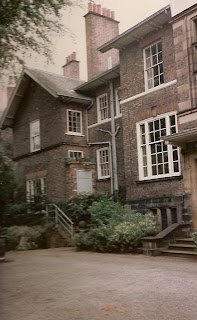 Our house was from the drainpipe to the left.

All the rooms were huge, with very high ceilings. The kitchen, formal dining room, and cloak room were on the entry floor. Behind the cloak room was a loo. It was a little room with a pull-chain toilet and basin, similar to a bathroom on a European train. It was lit by a skylight to a tiny window high above, so it was very dim at best. You had to be frantic to go in there! 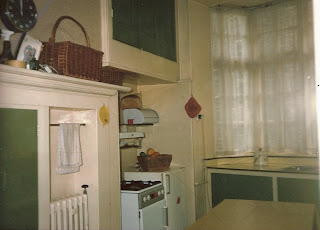 A few steps down from the kitchen was a box room. It housed potting and gardening supplies and had a big old-fashioned sink with counters all around. More stairs went down to a very spooky basement with a frightening boiler. I only went down there twice. 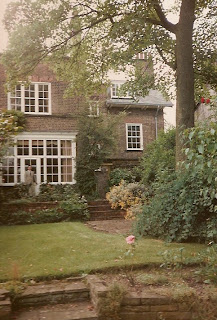 Up a flight of stairs from the entry was a giant living room with a veranda leading to a park-like backyard. Another two flights of stairs took us to three bedrooms, all with basins and fireplaces (that weren't in use) and hulking carved wardrobes for closets. There was a bathroom for the bathtub, (no shower or toilet) and a separate water closet with a pull-chain toilet. 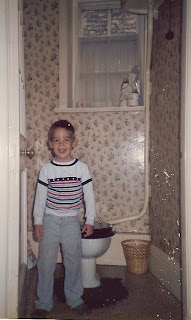 Pete in the WC

Two more flights led to the attic loft, off a little landing. This room had a strange, tiny basin with only a trickle of water, and was also missing part of it's window. (It was July, so we didn't notice that til later . . . we didn't notice a lot of things til later.) 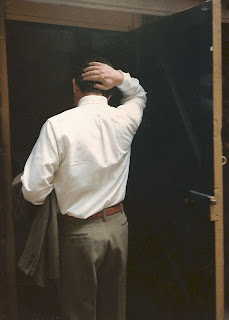 Dee, wondering what we were doing

Marty, I'm glad you found me. I've been reading these posts and we have a lot in common.

Ha, even tho our house was built 62 years after this one you're writing about, it's got plenty of quirks of its own. It's a constant fixer-upper and once upon a time, when I HAD time, I loved tinkering around, painting and doing whatever. Now I feel like it's falling down around my ears, I have so little time to do ANYTHING anymore. But, quirks and all, it has a personality all its own and I love it. It's patient...it's waiting for me. It knows one day my chaotic lifestyle will finally slow down. Trouble is, by then I'll be too old to do anything, haha! Then we'll just settle down and fall apart together.

I so love these stories. Your kids can't appreciate how cool we inlaws find this stuff. Kind of like how my life is much more entertaining and interesting to others (like you!) Love them!

I once read about a woman who had 5 kids and wanted to rent a house but the landlord said,"NO KIDS".

So, on the way to see the place she passed the cemetary and got an idea. She told the kids to sit on the bench in the graveyard and not move till she got back. Then she went to see the landlord who asked if she had any children.She said'" yes I do, but they are in the cemetary."

He felt very sorry for her and had her sign the lease, which did not mention anything one way or the other about children.

She moved in with the 5 kids and he was astonished and said"You told me your children were dead."
She replied,"NO, I said only that they were in the cemetary, YOU assumed they were dead."

She stayed there for 4 years and the landlord forgave her and liked the kids.

It sounds and looks charming - but I send some discontent later...LOL

Oh heck! I love old houses and celebrate quirks! I'd be right at home there!!!!