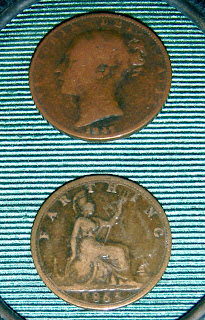 This little antique frame was a special present from Dee. It holds coins that equal a quarter of a penny...a farthing. As far back as Henry VIII this was a measurement of money, and these pieces are from Victorian times. It is a very sentimental gift with lots of meaning.

When we first met in Salzburg, we were both living on extremely tight budgets. Every schilling was counted and spent with thoughtfulness...not always wisely, but with good intentions. One night Dee offered to take me out to dinner, and pay. I protested, saying he couldn't afford it, and he said "I'd spend my last farthing on you."

There have been lots of last farthings since then.

While we were in school Dee worked teaching German at the old LTM, and at a golf course. During the winter we were living on farthings. He had a $50 a month income from the ROTC that sustained us until he became a research assistant. (You make tons of money as a research assistant, I can tell you.)

After graduation, with a real job, we had long stretches where we forgot about farthings. We were making big bucks by then, and our kids were little and didn't cost much. We could afford all the necessities and lots of luxuries. We saved for missions, college and retirement. Our kids even had trust funds. (There wasn't any actual money in the funds; we were planning ahead.) But things weren't all they were cracked up to be. It was time again for farthings.

In 1985 we decided to make some dreams come true. We sold everything of worth, rented out our house, and moved to York, England. All 7 kids and Dee went to school and we returned a year later with a lot of fabulous memories and a Master's Degree in Historic Preservation. We had spent our last farthing on this great adventure, and we started over with a new career.

The first year Dee was asked to sit on a committee for the Church Sesquicentennial in England. Everyone on the committee except Dee was seconded from university positions, so they all had salaries that came with them. Dee was a very honored and respected volunteer. We sold art work, cameras, guns, cars, and eventually our house to get a few farthings. It was a second year of education, and most of Dee's future projects grew out of the experience he gained, but it was pretty tight. By then the kids were expensive. All the mission, college and retirement savings accounts were emptied, and the trust funds became a memory.

It was worth every farthing.

Over the years, we have had many huge opportunities. People are willing to pay a lot of money for Dee's expertise and skills. Projects are numerous, but when they end in a blaze of glory and publication, suddenly he is unemployed until he arranges for something new. It always comes back to farthings. It's a precarious and adventurous way to live. He has invented a way to be paid for doing what he loves to do. He'd actually do it for free (and has done a few times), but it's better to make a few farthings and pay the rent.

Often when we are down to $300....$200...(once it was 37 cents,) we have seen miracles happen. Dee calls them "privileges of poverty." One Memorial Day we wanted to plan something fun and we decided to spend our last farthings on a family outing. The kids all gathered around the table with their donations and we came up with about $50. We got out a map and found some ghost towns within a few hundred miles. We went exploring for old roads, houses and train stations, and spent our money on Gyros at a tiny diner called The Greek Streak, in a little town down south. It was a great weekend!

Another time we were celebrating Heidi's birthday at a restaurant of her choosing. The promised checks were in the mail, but had not arrived the day before, and we didn't know how we'd pay for dinner for 12. Dee told me that he'd rather spend his last farthing than disappoint Heidi. That afternoon we recieved a letter from Micah who was in England. It had $100 bill in it! Someone had sent it to him, and he said that rather than exchange it for pounds, he thought he'd surprise us! What kid sends money HOME?? (The birthday dinner cost $96 with the tip.) When you live close to the edge, you experience a few thrills.

It never seemed strange in our family for the kids to contribute. We always knew we'd spend our last farthings on each other.
Posted by Travelin'Oma at 8:40 PM

Your family has certainly enjoyed a truly amazing life. I admire your willingness to take risks so that you and your children could experience so many wonderful opportunities. It sounds like it was worth every farthing.

Oh dear...I almost forgot to thank you for the link to my blog. It is much appreciated. Consider yourself linked as well.

You guys are just the best!

I thought the $100 was a loan. Thanks for reminding me. I'll take repayment in farthings or house visits from Oms and Ops.

Our family is a little like that too. I mean spend our last farthings on each other. Isn't it wonderful to have family like that?

Hi, thanks for stopping by my blog and leaving a note last night. I'm not too much worse for the wear this morning.

I love this post...I love having your having trust funds...nothing in them, but we have them.